This week we finished up the lower diffusion pattern on the South wall and then brought the North Wall even to that level.  Compared to the average progress of the last month, the blocks are now positively flying up into position.

From 10′ up on the scaffolding, here’s the pattern on the South wall:

In addition to finishing the pattern, we also grouted up to the 18th course, adding another 24 sticks of #5 rebar: 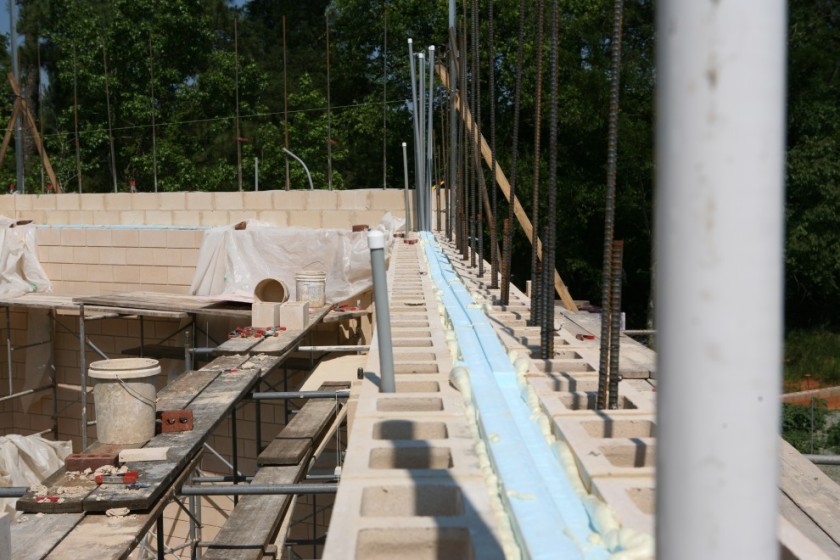 And here’s what it looks like from the North side:

You can see just how many blocks are in position to go up onto the North wall.  You might also notice in the above photo that the scaffolding has been raised to a new level since three weeks ago.  Here’s that scaffolding going up:

With all those blocks now in the walls, the blocks in the field are starting to thin out: 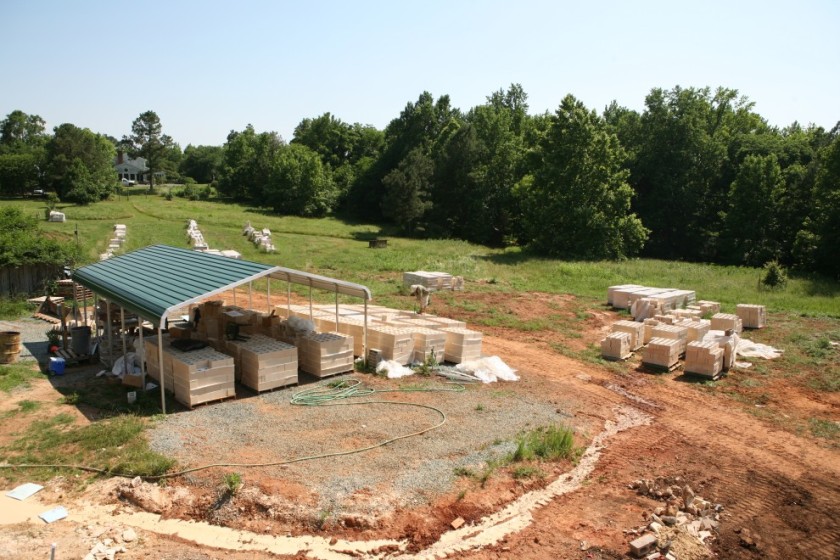 Truthfully, we still do have a long way to go!

Before you know it, another 108 blocks are up, bringing the outer wythe of the North wall up to the18th course:

And again, as with the South Wall, the end of the North shear wall means progress can accelerate yet again.  Here’s the pretty side: 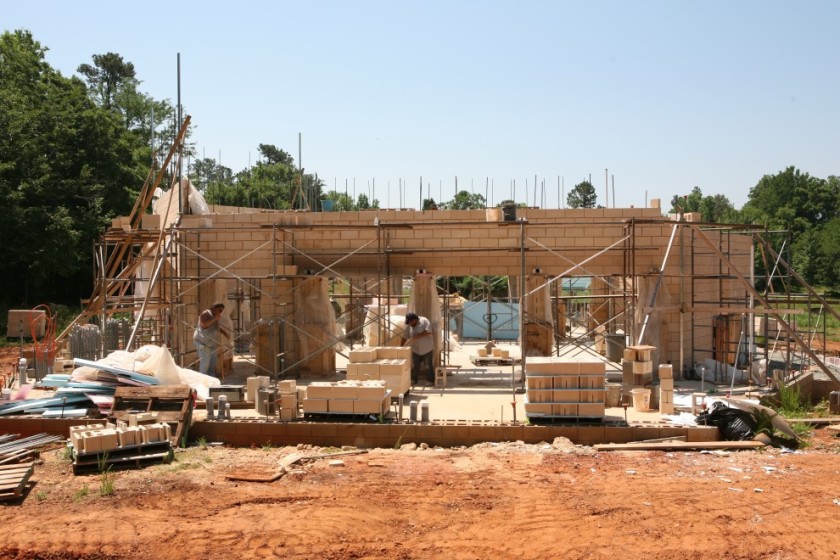 A pallet jack lifts and will transport the RPG blocks that are destined to be part of the lower North diffusion pattern: 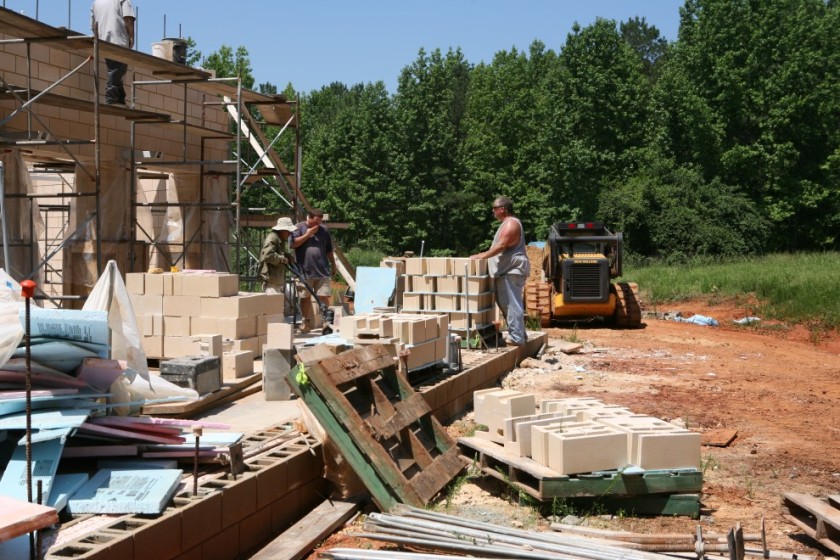 And the flat-faced blocks that make up the background for the pattern are delivered by forklift (for later positioning by the aforementioned pallet jack):

And again, before you know it, another 150+ blocks are up: 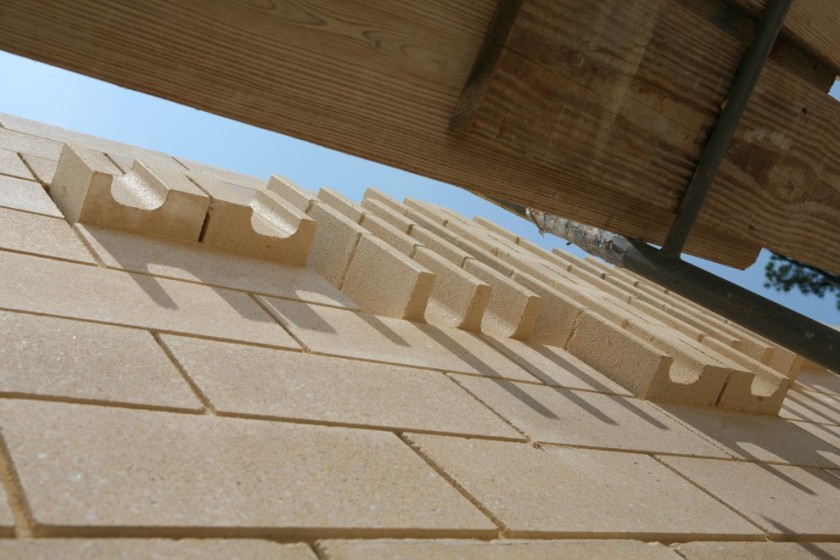 And then comes the grouting, and another two dozen sticks of #5 rebar.  Now the scaffolding doesn’t quite look so tall! 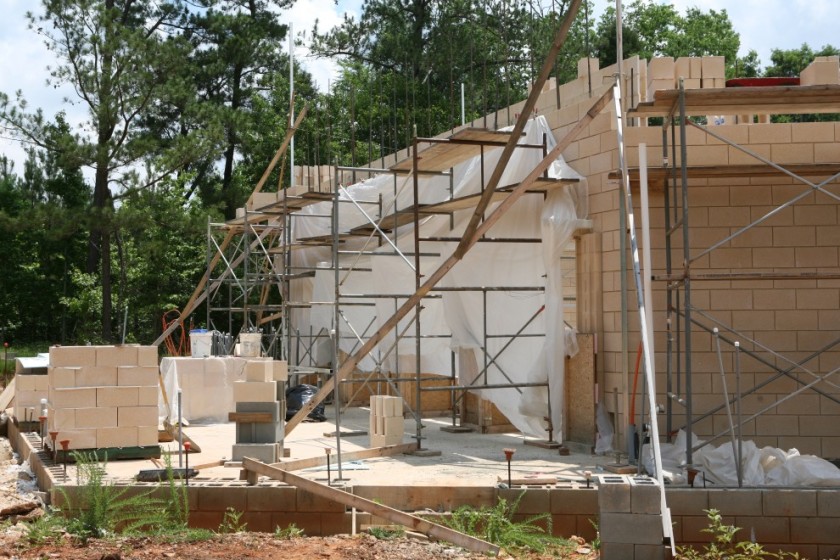 With 90 CMU per pallet, I’d call this good progress over the past few weeks:

Last but not least, a new storey pole is measured and installed so that we can bring the West wall up to match.  The tape is slack in this image, but the fact is this pole was measured to 1/16″ from every other reference pole according to the diamond grid of the design.

We made good progress this week!