Just in time for the holiday gift-giving season, AbstractLogix is now selling the latest release from the rock/funk fusion group My 3 Sons.  Titled Who’s We?, the album was recorded and mixed at Manifold Recording this summer by Ian Schreier.  Recorded live with minimal overdubs to capture the dynamics and tone of a high-energy My 3 Sons performance, it exemplifies the magic that can happen when a great band comes together in a great space to play great music.

There are some other new releases coming out around the corner, but this one’s available now.  Check it out!

This week the legendary baritone Sherrill Milnes visited the Triangle, sharing his wealth of knowledge and experiences through a series of lectures, dinners, and Master Classes.  Yesterday he gave a Master Class at UNC Chapel Hill for (college-aged) voice students, and today he gave a Master Class at the studio for (graduate-level) fellows of the AJ Fletcher Opera Institute at UNC School of the Arts.  The event drew participants all the way from Winston-Salem to Raleigh, with a goodly number coming from Chapel Hill, Durham, and, of course, Pittsboro. END_OF_DOCUMENT_TOKEN_TO_BE_REPLACED

Two weeks ago, world-renowned and Grammy®-winning violinist Gil Shaham performed Tchaikovsky’s Violin Concerto in D with the UNC Symphony Orchestra. The electrifying performance was a capstone event for the first half of his 2015-2016 artist-in-residence program at UNC Chapel Hill.  The smiles on the faces of those students after the performance confirmed that they knew that they had not merely witnessed greatness, but had participating in creating that greatness.  And with that great success now a part of their foundation, they can aim even higher in whatever they do next, whether it be more performances, academics, professional career ambitions, or public service.  As a Carolina Performing Arts board member, I am proud generally of the artistic residencies we have helped to realize at Chapel Hill, and very proud of this one in particular. 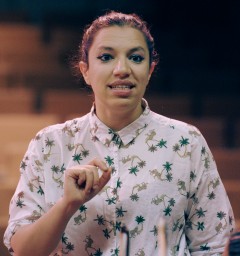 Last week, I had a chance to witness and help support another artist-in-residence program in Chapel Hill.  Banda Magda (founded by Greek-born singer, film scorer, and composer Magda Giannikou) has played Carnegie Hall, Webster Hall, Irving Plaza, The Kennedy Center, The Jefferson Center, Celebrate Brooklyn, Jazz al Parque, St. Moritz Festival Da Jazz, and the Chicago World Music Festival.  Their debut album Amour, t’es là? set a blistering pace (Top 10 Billboard World Music Charts, NPR’s All Songs Considered, First Listen, NPR’s 10 favorite World Music Albums 2013), and their second album Yerakina shows the next step in their musical evolution.  Magda and her band-mates have composed and/or performed on a number of Grammy®-winning and Grammy®-nominated projects, yet instead of chasing only brighter and brighter lights, she takes the time to bring up the next generation of artists and creators by doing artist residences with youth orchestras.  This year the stars aligned for the youth orchestra of the Guy B. Phillips Middle School in Chapel Hill, North Carolina.