Well that was fast…one week we’re laying down the first of our wall plates, and the next, we’re done!

With the booth framing, that is.  But there’s a lot more happening elsewhere, too…

For starters, we’re getting really serious about heating the building and drying out the slab and blocks.  Whereas we used to have a pair of 200,000 BTU/hr heaters, we now have an additional four 300,000 BTU/hr heaters.  Here’s one of the new ones sitting in the Control Room:

When all of these are running, you can really feel the heat.  (And you can hear the gas flowing from our new propane tank feeding more than 1M BTU/hr into the building…)  85° is the new room temperature for now…which means we can lay up blocks when the weather is below freezing (which it has been lately).  There are three more block walls to go up: a very small wall between Sound Lock 2 and the eQuipment Room, and the two walls separating the bathrooms from their opposite rooms  Here is the very start of one such wall (the QR):

The above photo warrants a bit of explanation.  First of all, you are looking at the Southeast corner of the Music Room, which in earlier days looked like this: 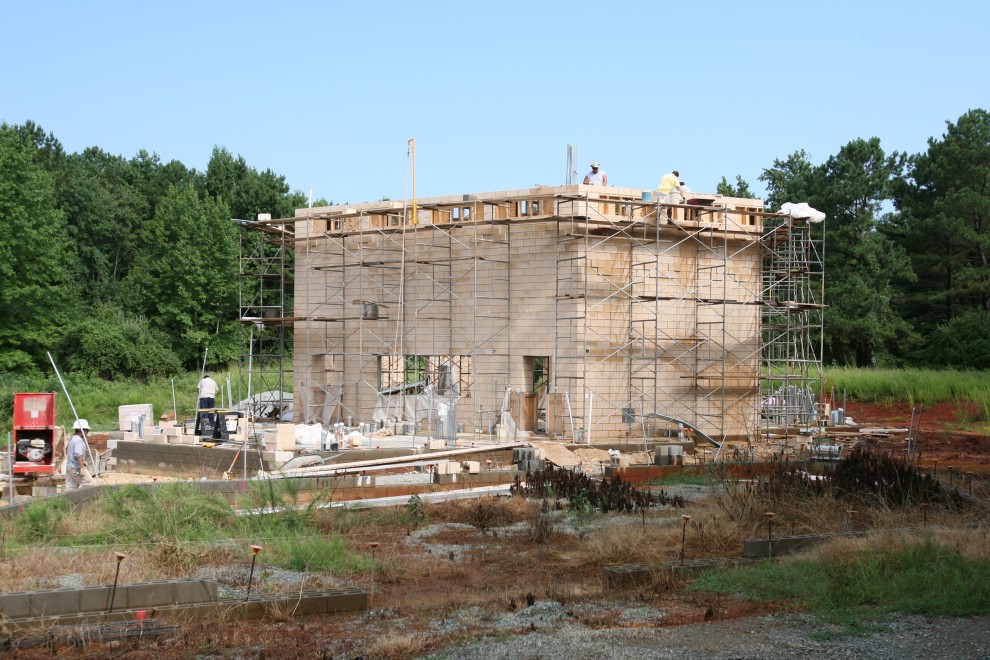 You’d think a corner that’s 24″ thick and solid-filled concrete architectural block would be an exterior wall, and it is once you get above the lower roof.  But down between the Sound Lock and the QR it’s an interior feature, and one whose corner needs a small bit of reorienting.  We want that corner to look concave, not convex (and certainly not a vexed concavity).  So the masons carved out a vertical strip of block wide enough that we can establish a new masonry reference for the corner on the inside of the building.  It’s actually quite a cool trick if you think about it.

On the other side of the wall no such special treatment is needed because the complement to 90° is 90°:

It doesn’t take long before we’re up 4-5 courses: 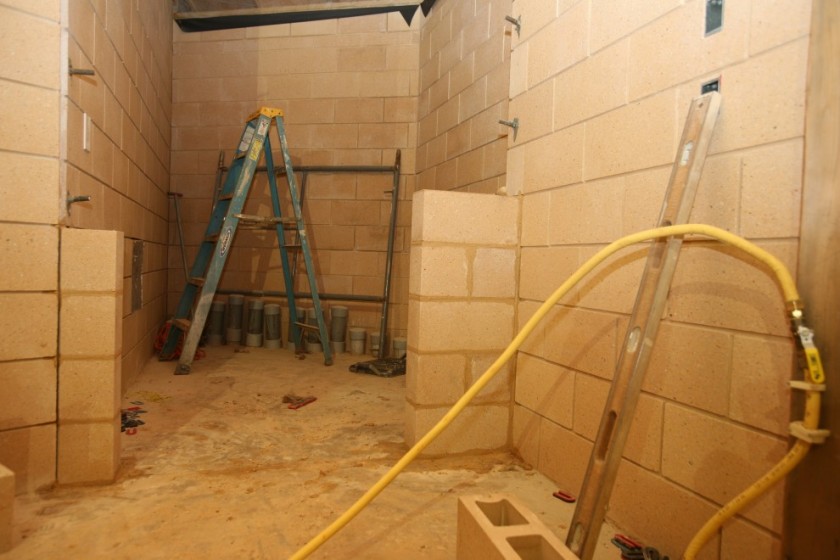 And after a day of curing (in these nice hot rooms), the blocks are grout-filled and rebar is set: 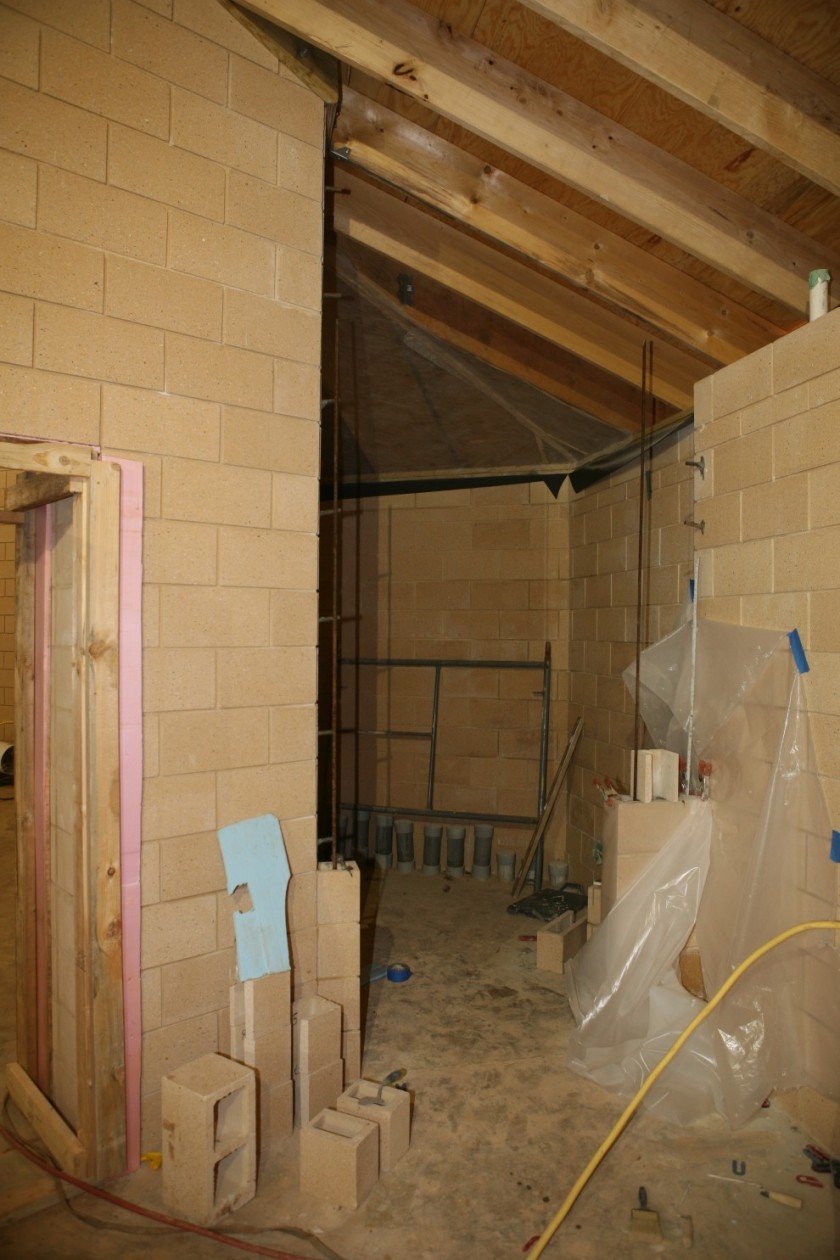 That’s right…we’re putting rebar everywhere it belongs, even if (or especially if) we’re just holding up the half-blocks that hold the door to a machine room.

Speaking of steel, the steel for the Annex roof was delivered.  I’m not sure this image does justice to the W10x77 steel beams that these guys are putting together, but they are MASSIVE:

At 77 lbs per foot in length, and each compound beam being a joining of two beams almost 21′ in length, each beam, when plated, brazed, and bolted, probably weighs 3250 lbs.  So the two you see in the photo weigh 6500 lbs.  Why so much?  Because the Annex structure is basically a 30′ wide cathedral ceiling, with no true lateral support until you get to the 8′ wide ends of the building.  These beams carry the entire roof, and the other beams merely steer the forces to be carried by these two.

Here the final joint of the final beam pair is made with a 150 AMP arc welder:

And the finished product:

After the basic steel delivery is completed, the framing crew must prepare to pack the steel with wood (so that the rafters have something to nail into).  These W10x77s won’t receive any wood, but other steel beams will.  Here’s another photo just showing how large these W10x77 beams really are—by making powertools and wood plating look small by comparison:

Here you can see that the steel beam over the Annex garage has been packed, and the wall plates have been installed: 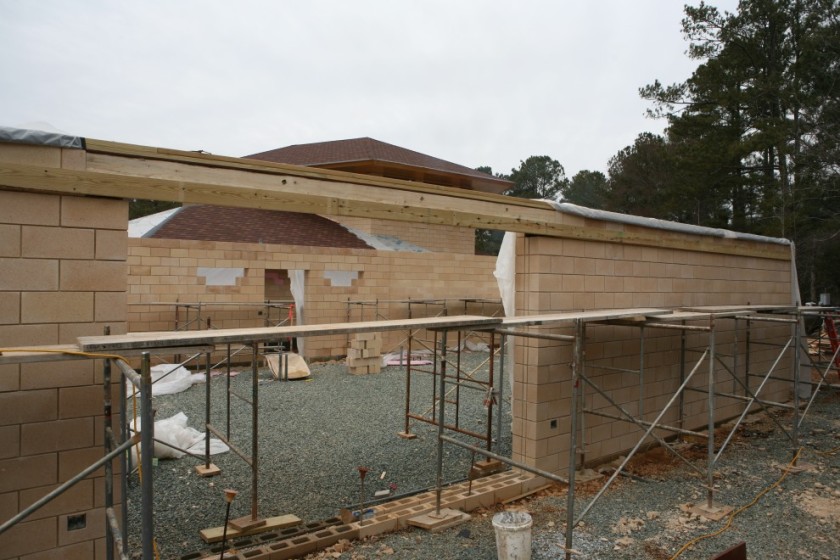 And the last exterior wall plate is finally installed:

Meanwhile, another crew has been working all week in the Music Room getting ready to start work on the ceiling.  I’m not really clear on the initial plan of how we were going to build the ceiling, but for a number of reasons, acoustic, aesthetic, and for the sanity of the construction workers, Wes came up with a completely new design that added several pages to our plans, and the introduction of all kinds of new materials.  To make that long story short, we’re building a translation layer that converts the roof-friendly layout of the ceiling joists to a ceiling-friendly layout for our drywall and ultimately ceiling finish teams.  A grid of spring isolators (screwed into the joists) suspends a new grid of cold-rolled steel, which in turn holds up C-channel and “hat channel” that is appropriately oriented and dimensioned for drywall installation.  Here are some photos of the springs, first in detail: 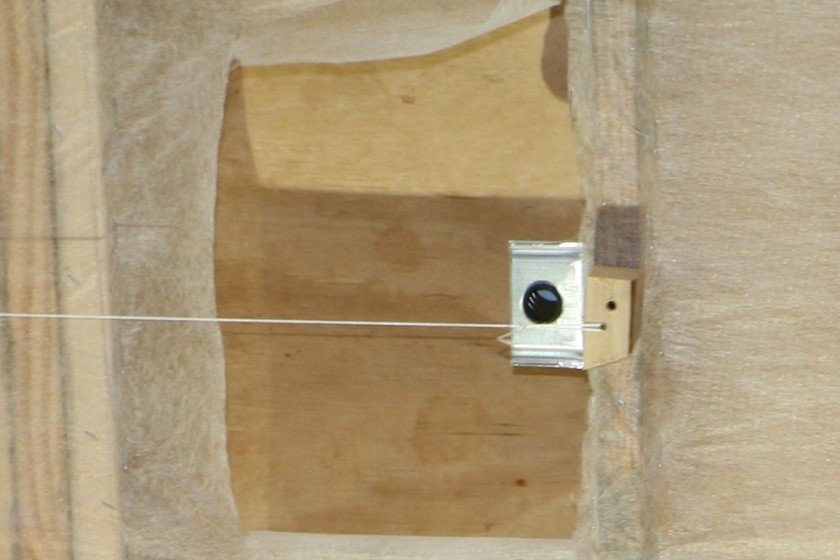 And then in context:

There are lots of springs!  Each one holds up to 210 lbs, and the total carrying capacity of the design (after one update) is over 20,000 lbs.  Our ceiling and acoustic cloud will weigh approximately 12,000 lbs, plus another 1,200 lbs of lighting equipment.  And because of the spring isolation, we should have very good acoustic isolation indeed!

Here’s the C-channel and the Hat Channel material: 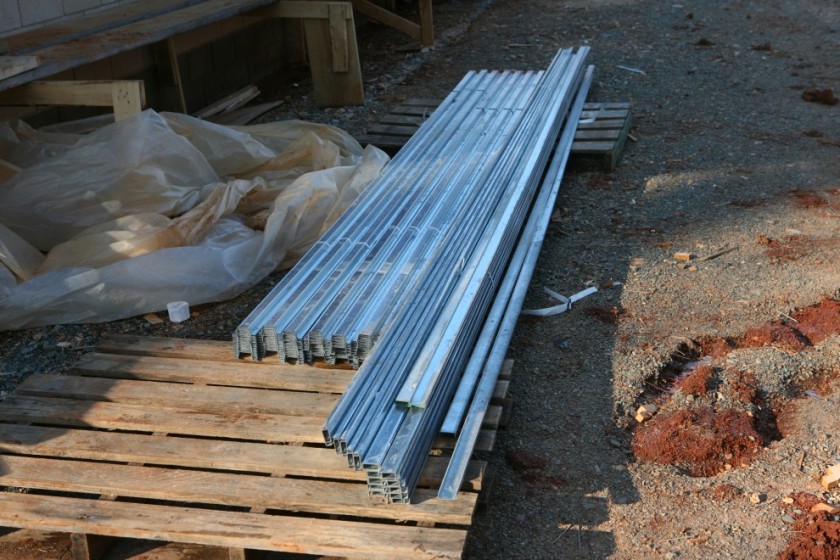 Here’s the reconfigured attachment grid of the cold-rolled steel in the Music Room:

And the colorful plans that represent some aspects of and changes to this new configuration:

Back to the framing photos…here’s an earlier progress picture showing the Booth framing.  The king studs that define the door frame are up, but not yet the jack studs:

Now if we take a step back you can still see it:

The bottom plates (not shown) and top plates are similarly isolated:

The wall between Booth B and Booth C uses staggered studs to decouple the drywall on each side of the walls.  This photo shows the intended construction on the right hand side of the corner, and an error to the left of the corner (which will be corrected):

For those who are curious, the paper Control of Sound Transmission Through Gypsum Board Walls pretty much spells out the mass/construction/depth/insulation equations, and there is no magic.  If the two walls can transmit sound directly through a rigid connection (such as a solid wood stud), then you effectively have a single-barrier solution, dependent solely on mass with and no benefit of cavity depth or insulation fill.  It’s an acoustic short-circuit.  Once the connection is broken (with staggered studs, resilient channel, or double walls), then cavity depth and insulation fill can augment whatever mass you choose to hang.  As much fun as it might be to try to build an STC 100 wall between two booths, that’s not the design objective.  The design objective between Booths B and C is to have the wall fit nicely on the 16″ wide masonry column that separates the window in Booth C from the adjacent one in Booth B, and because the frame wall hits the masonry at a 30° angle, it means our true thickness must be sin(30°) thinner, or about 15% thinner than our dimension at the masonry joint.  Our design fits those parameters and is expected to deliver close to STC 60 by using 6 layers of gypsum as seen in a previously posted wall section.

Here’s some of our fill:

For the wall between Booth A and Booth B, we’re using a different construction: a frame wall with resilient channel.  This will give us similar STC numbers compared with the staggered stud approach while greatly simplifying the problem of how we hang doors in the middle of the wall.  Since the IAC doors will be STC 51, there’s not much point in trying to make an STC 100 wall here, either.  We will make the doors the limiting step to acoustic isolation, and we’ll use the rest of the depth of our walls for other acoustic considerations, including diffusion, absorption, and bass-trapping.

If you look closely you can see that we have the attic decking over Booth C: 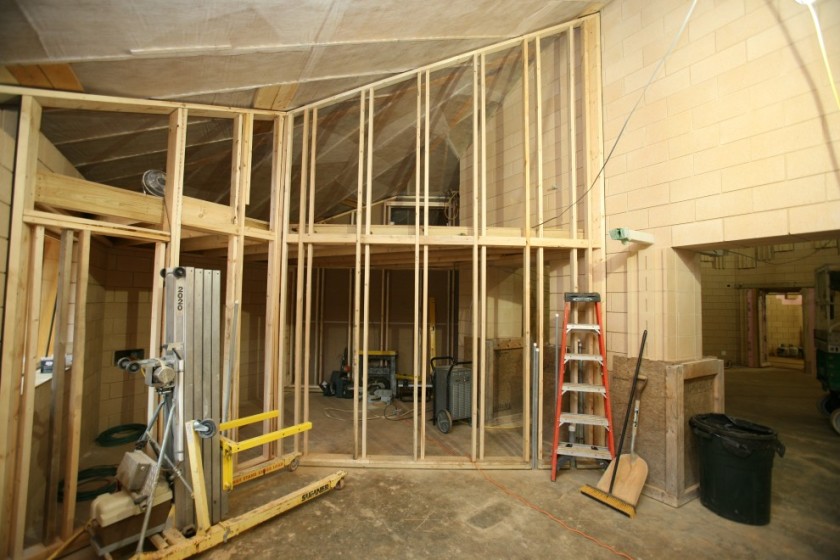 And here you don’t have to look so closely, it’s obvious: