It has been a while since my last blog posting, which means there is much, Much, MUCH to tell.  I’m not sure that I can do it all justice in one evening, but there are some highlights I want to hit.

In early November, pianist Kimiko Ishizaka performed Bach’s Well-Tempered Clavier in the Music Room of Manifold Recording.   The event was recorded in front of a live studio audience and webcast around the word, presented by The Miraverse.  We produced two videos, one for studio geeks showing all our microphones, microphone locations, and all sorts of other studio gear that would be involved in the session, and one of Kimiko’s actual performance (which was magnificent).  Thanks again to Robert Douglass for doing the legwork to make this event possible, and to Ms. Ishizaka for sharing her life’s study and practice of Bach with us.

It was very much my intention to write a blog posting shortly after the session–especially because it was such a great experience for all who participated, but we got too busy with all that this event put into motion for us.Video of one kind or another has been a part of our planning since before we opened.  One of the first videos shot in our facility (The Community Chorus Project singing “Everybody Hurts”) went viral when the band REM promoted it to the front of their fan page.  We helped best-selling author Dan Heath produce training videos for clients around the world.  Marimba One brought Ivana Bilic from Croatia our studios to better understand the acoustics of their own instruments, and we produced two amazing videos (Wild Rose and Sleep) from that.  We shot two day’s worth of video when Jimmy Herring came to the studio to do some master classes and to share his thoughts on music [1] [2] and gear with Premier Guitar magazine.  The clip of Jimmy and his band playing Matt’s Funk has racked up over 80,000 views and is on track to pass 100,000 some time this year.  We worked with Carolina Performing Arts to produce a video when Béla Fleck came to the studio to record his latest album, The Imposter.  When some scouts came to the area to find a suitable location for doing a TV commercial with Scotty McCreery, we go the call: 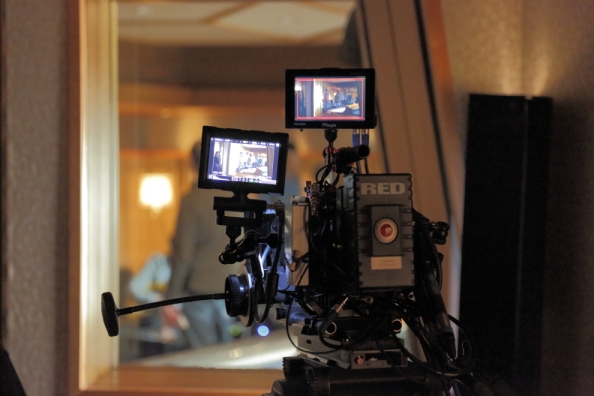 And in November, we provided the setting for a documentary about Michael Macias, a young pianist from Fayetteville who has been blind since birth (“What Michael Sees“):

Our mix session with Hindugrass even made it into a WRAL news story right after Christmas!

Here are two clips fresh out of the edit bay that show what we can do in our control room with just a few lights on stands:

We’ll be sharing more videos soon, but this is just a progress report.  More to come…

One thought on “Progress Report (Video)”