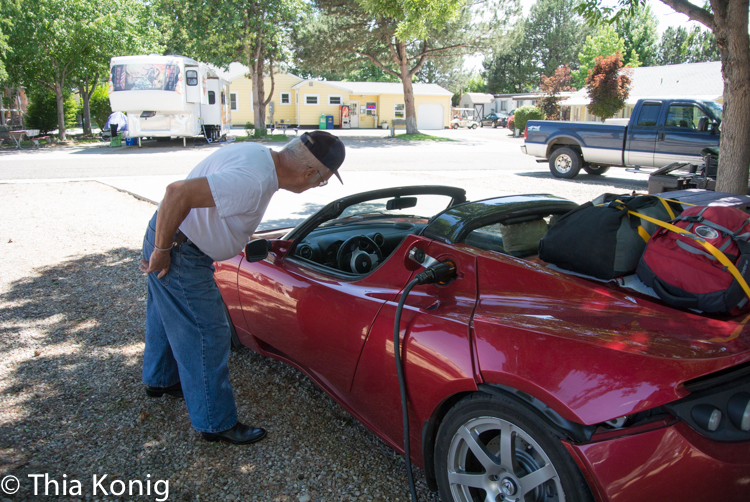 For the past several months, Thia Konig has been treating us to a wonderful journal of her photography titled Pioneering the Electric Highway.  It documents her adventures with Ben Woodard as they go where no electric vehicles have gone before.  And in so doing, they became pioneers of the electric highway–at least on the West Coast.  This “road trip of a lifetime” (as Thia described it) called for a spirit of adventure, a willingness to venture into the unknown.  And what made it work was their winning ways of finding power in the community, literally.

According to the US Department of Energy, there are just over 6,200 electric vehicle charging stations in the US today.  Using their handy-dandy locator, I found there are 3 within a 15 mile radius of Manifold Recording, including one less than 3 miles away, at Central Carolina Community College.  But if you were in Bandera, Texas (just outside San Antonio) and wanted to drive to Socorro (just outside of El Paso), there are presently zero stations along that 501 mile route.  That’s an adventure!  And the only way to do it is to make friends along the way.  Thia and Ben’s journey was like that…The Love Bug meets the 21st Century.

Inspired by their pioneering drive, we have decided to make Manifold Recording a friendly place for clients with electric vehicles.  First, we installed several 20A circuits of 120V shore power convenient to our parking areas.  Though these only deliver enough current to charge at a rate of 4-5 miles per hour, that adds 30-50 miles of range during a typical 8-10 hour session, more than enough to get home at the end of the day.  But we wanted to do more, so we installed a weatherproof NEMA 14-50 outlet in front of the garage.  Charging 6x faster than using a typical household circuit, it can top off a Tesla with 30 miles of charge during a one hour business meeting.  It can deliver 60 miles of charge during a two hour film screening and review.  That’s friendly!

It’s also climate-friendly: every electron delivered via these outlets is fully offset by electrons generated by our 92kWh Solar Double-Cropping system.

So if you have a high-end music, video or film project to do, and a spirit of adventure, bring them to Manifold Recording and let’s work together!