We are still hoping to “open our doors” by the end of the year, and to do so we really need two things to happen:

Early Monday morning, and right on schedule, a truck pulled up to the site carrying 12,000 pounds of hardware and packaging from the Industrial Acoustics Company.  This directly addresses item #1, but it also critically enables item #2, because we have a lot of work to do before we are even ready to begin the console commissioning process.  Nevertheless, we do have a schedule that works if everybody delivers according to plan, and IAC did their part to initiate our 6-week sprint with an excellent start:

These are the frames for the double-leaf doors that will be part of Booths A and B: 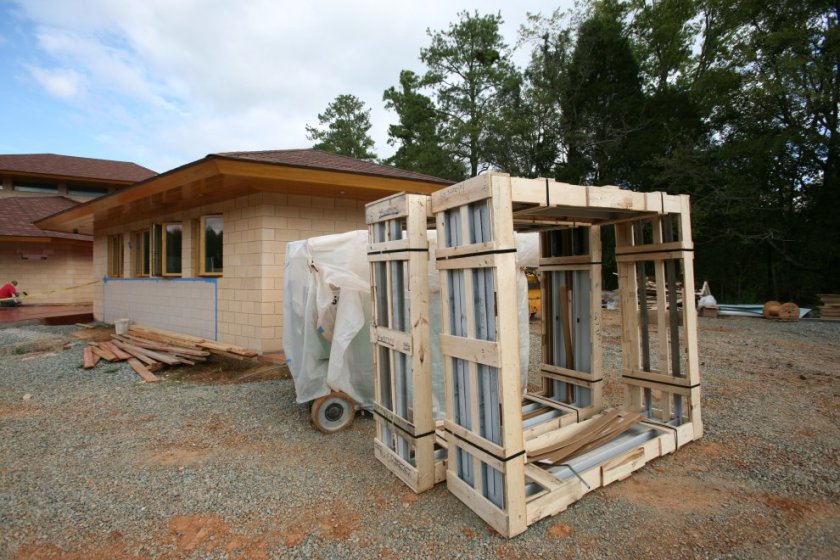 After a day of unloading and another day of final preparation, the first door is hung:

Our door guy tells me that we have the best framing he’s ever seen, and he predicts that we’ll have a much easier install than he’d expected, saving time and money.  There are plenty of horror stories about installations that went awry because the framing crew did not do their job, or worse, did the wrong job.  One example: a 30′ long wall that was built conventionally with simple drywall and studs.  Every time the door opens or closes, the entire wall bows in and out.  Or another wall that was so weakly built that when the door opened, the shear weight (the dead weight of the door times the length of the lever the door applied to its hinges) ripped the frame straight out of the wall. Why on earth somebody would buy such expensive doors and then completely compromise the wall design is beyond me, but apparently it happens all the time: after a designer sweats all the details, some middle manager steps in and does “value engineering”.  Costs are cut, yes, but value is utterly destroyed.

Our framing is quite secure, with five jack studs:

Giving us confidence that our control room framing is plenty strong to hold these 350 lb doors in place.

Elsewhere the framing is even more robust, with 20+ inches of steel-reinforced concrete to hold our treated 2x8s in place:

By the end of the week the installer is hanging twice as many doors per day as he initially scheduled, and it’s all because our framing is perfect.  (There’s another horror story about a steel frame that was square when the installation started, but the frame may not have been designed or constructed properly.  When the very large (12′ wide) and very heavy (8500 lb) door went in, it bent the frame, and six months later they’re still trying to properly install that one door.  Ouch!)  For those of you who have complained or teased about the amount of time and care spent building this facility, this is why we take the time!

We’re also making great progress on the Control Room floor, which was sanded early in the week:

Then sanded a bit more:

Check out the precision of this pattern: 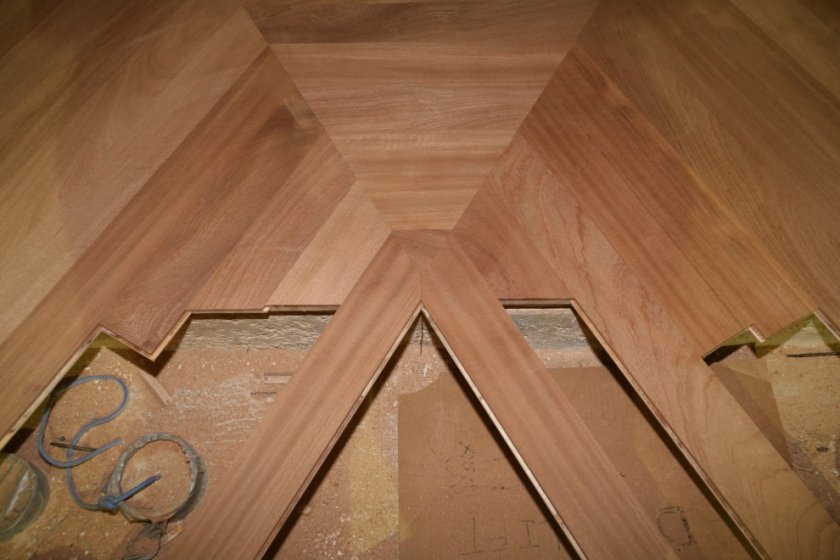 And then given its first coat of Tung Oil:

It looks good even under the harsh glare of a mercury-vapor work lamp:

Over in the Music Room the flooring team is figuring out how to make the diamonds for our rhombille tiling: 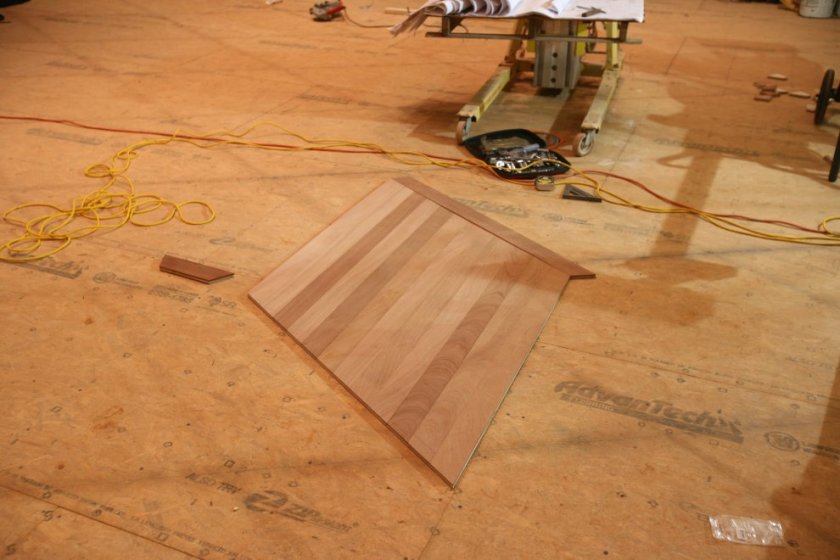 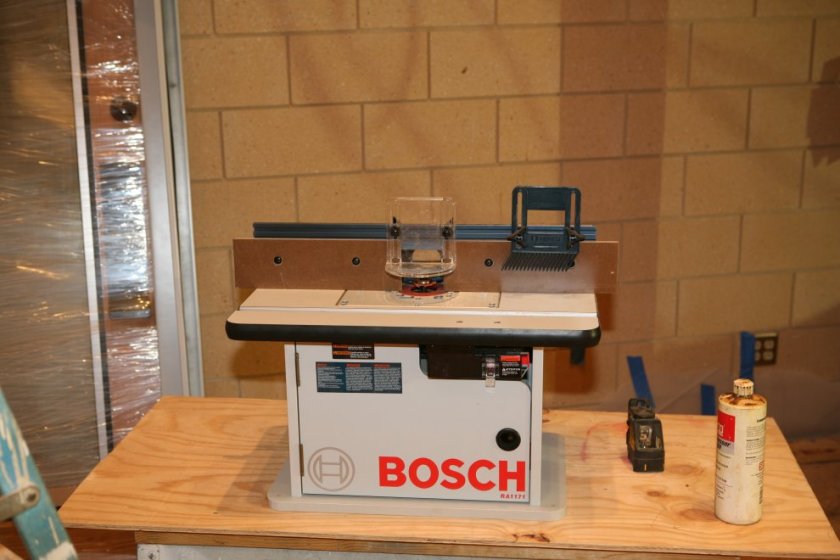 And the saw making the precise end cuts: 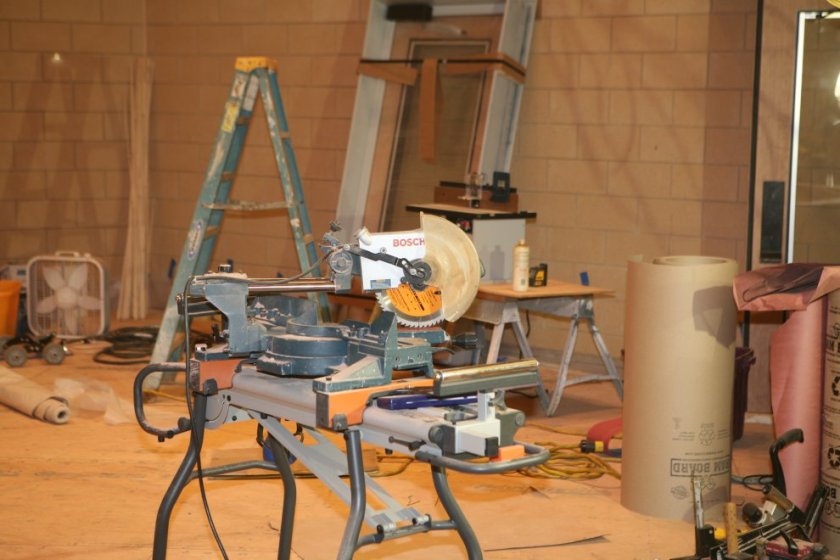 And a little tent they built to keep the dust somewhat contained while there’s so much other work going on at the same time:

Here’s a diamond that looks very much like the first one, but this one makes good connections on all edges in a repeatable way: 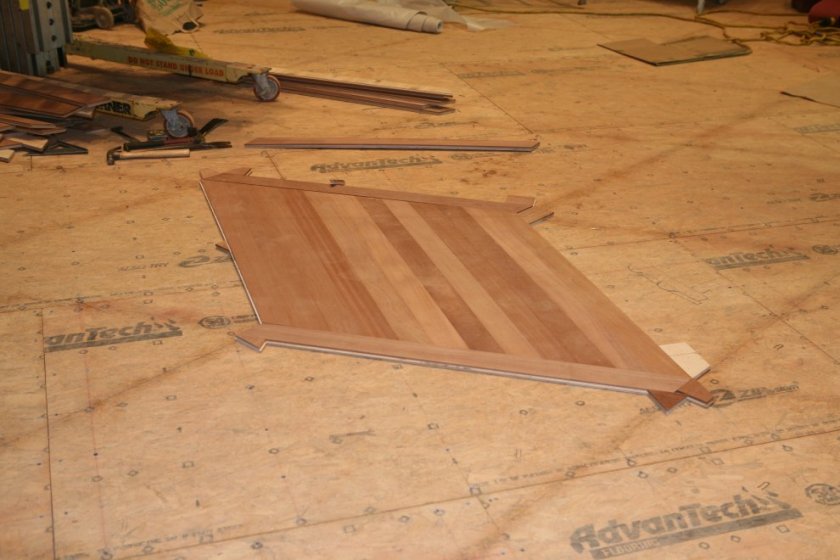 Over in the Annex, the last of the wire pulls is underway:

Now the machine room in the Annex looks properly full of wires:

The Annex duct work is down to the small bits:

Finally, to assess whether or not we are keeping to our completion schedule, compared to the fourth week of July, are we really half way finished?  At that time we had just installed the windows in the lounge, we had just started pouring the North Patio.  I definitely see a pretty massive change since then!