In the Annex Control Room the carpenters have cut and installed the subfascia for the rear soffit.  Here you can see one of them putting up the decking on top:

And here are a variety of perspectives to try to show what this curvature really looks like: 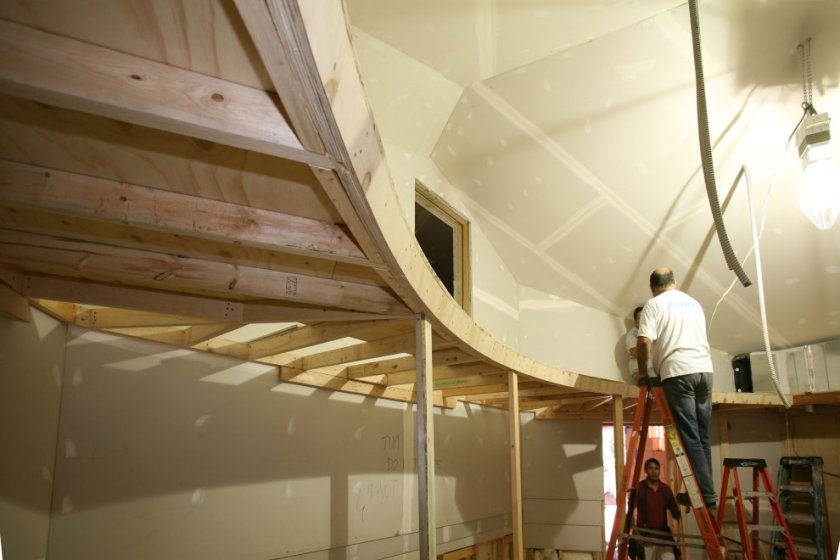 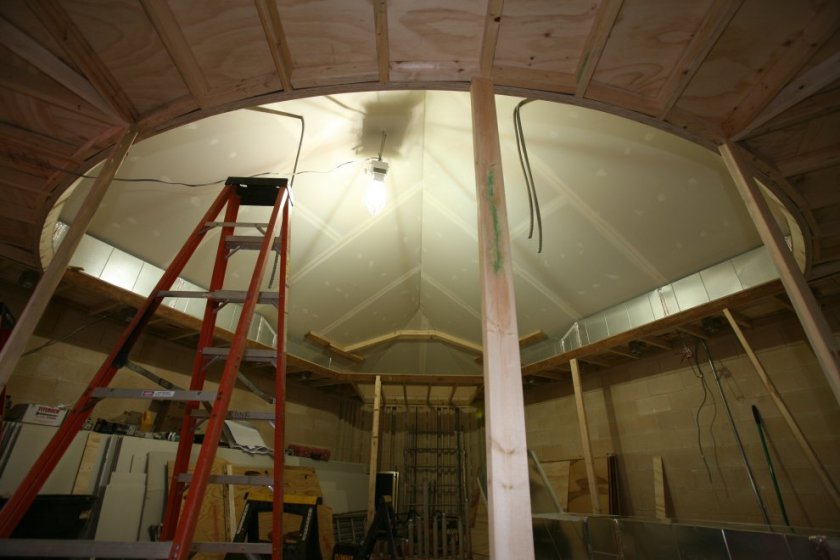 As you can see in the second and third of these three images, the curved sub-fascia has the same reverse-plumb that the other sub-fascias express: -22.5°.  And you may also notice that not only is the top surface of the sub-fascia level (it conforms perfectly to the decking above), but so is the bottom.  How was this accomplished?  With a very sharp pencil and a very keen mind.  As Dr. Mamikon Mnatsakanian explains in the article Unwrapping Curves from Cylinders and Cones:

For any ﬁnite portion of the cone with a circular base, as shown in Figure 16a, the unwrapped
image of the base is a circular arc with center at the cone’s vertex and radius equal to
the slant height s of that ﬁnite portion. In this simple case, the basic problem is easily
solved because the radial distance R(θ) is constant, R(θ) = R(0) = s .

Figure 16 also reveals a basic fact that plays a key role in solving the general prob-
lem. Let ρ denote the radius of the base in Figure 16a. When the base rolls through an
angle of ϕ radians, the corresponding portion of the base of arclength ρ ϕ unwraps onto
a circular arc of radius s and central angle that we denote by θ (Figure 16b). Because
the cone is a developable surface, distances are preserved when the cone is unrolled
onto a plane, so we have

When these circular arcs are cut with a bevel of 22.5° and installed in the proper order, the happy result is achieved:

But the work is not yet done as the posts holding up the soffit are only temporary.  When it is finished, it will hang from the ceiling, which, as far as the soffit is concerned, appears to be two 5:12 planes canted 30° away from the centerline.  The suspension of this circular arc can be seen as a cylinder which is bisected by the angled ceiling facets, resulting in an ellipse whose semi-minor axis is 12′ 3-1/2″ and whose semi-major axis is 12′ 3-1/2″ × 13/12.  (Why 13/12ths?  Because of the 5:12 roof pitch.)  The elliptical plates are put into position:

And here is a detail of the resulting projection onto the ceiling:

Now here is the whole picture, albeit distorted through a fisheye lens: 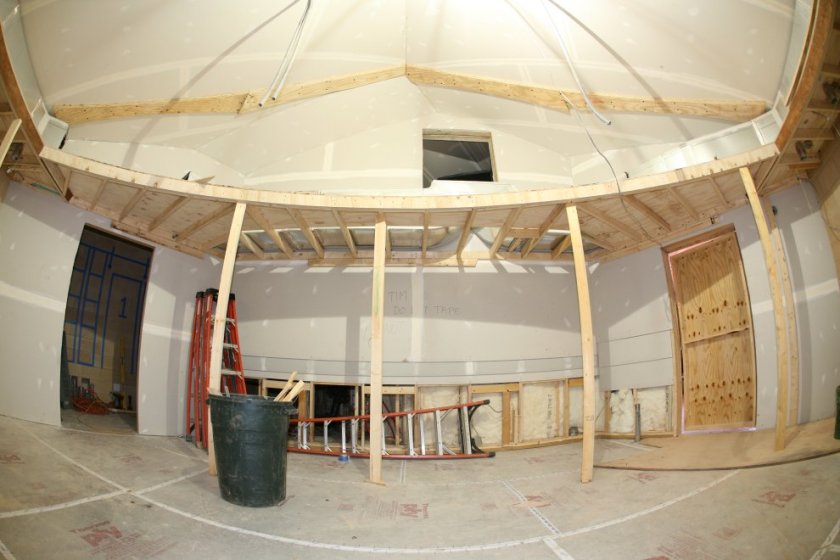 Phew!  But that’s not all…progress on the Music Room cloud was also very consistent this week.  Making good use of the scissors lift, the electricians install the lighting fixtures and conduits to power them:

The color of the wood, fabric, and block come together so nicely: 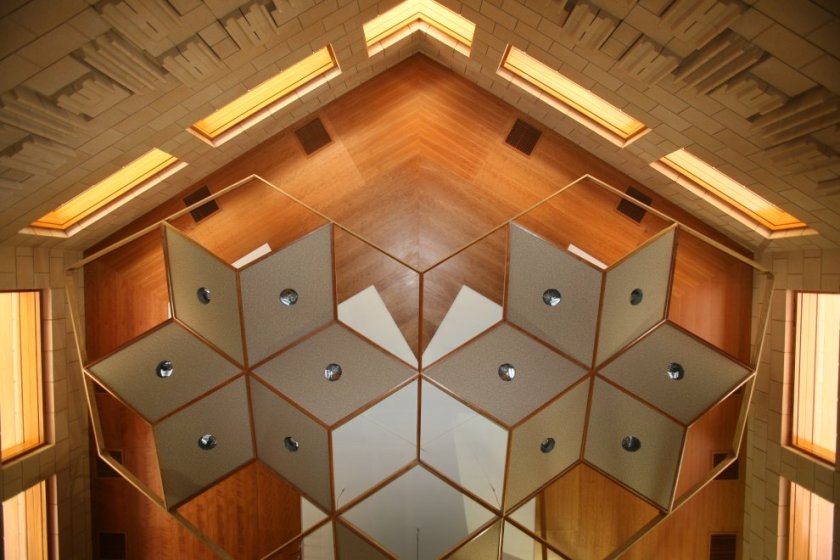 And here, with all the halogen lamps installed:

Even with a fisheye lens, it’s hard to capture the full breadth of this 52′ long ceiling!

Bringing things back down to earth, the hardwood floor installation is moving right along.  The floor in Booth B is now complete:

And Sound Lock 1 was nearly finished by lunchtime on Sunday:

Lots is happening outside as well.  The walls for the equipment corrals are basically up, with just one final course to go: 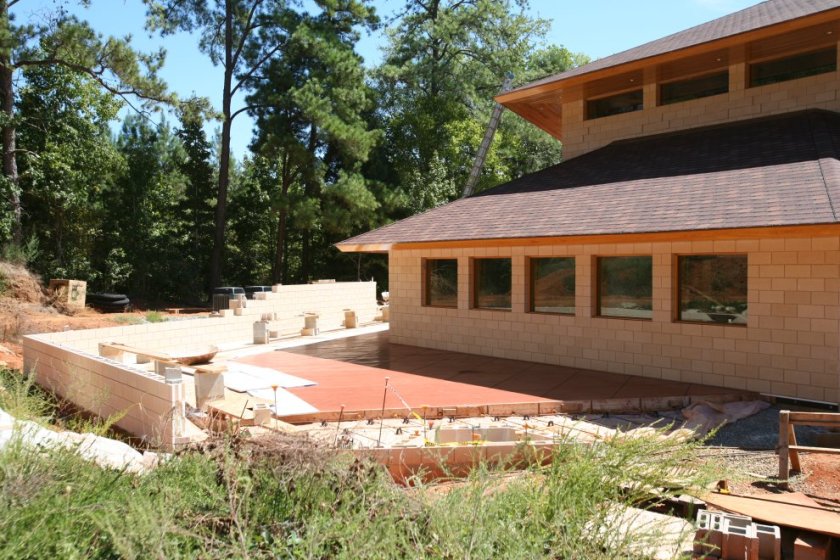 All in all, a very productive week!