We had a gorgeous week weather-wise, and progress has continued across all aspects of the project.  The following photo of our radiant heating manifold shows why I’m choosing to highlight the Utility Room progress this week: 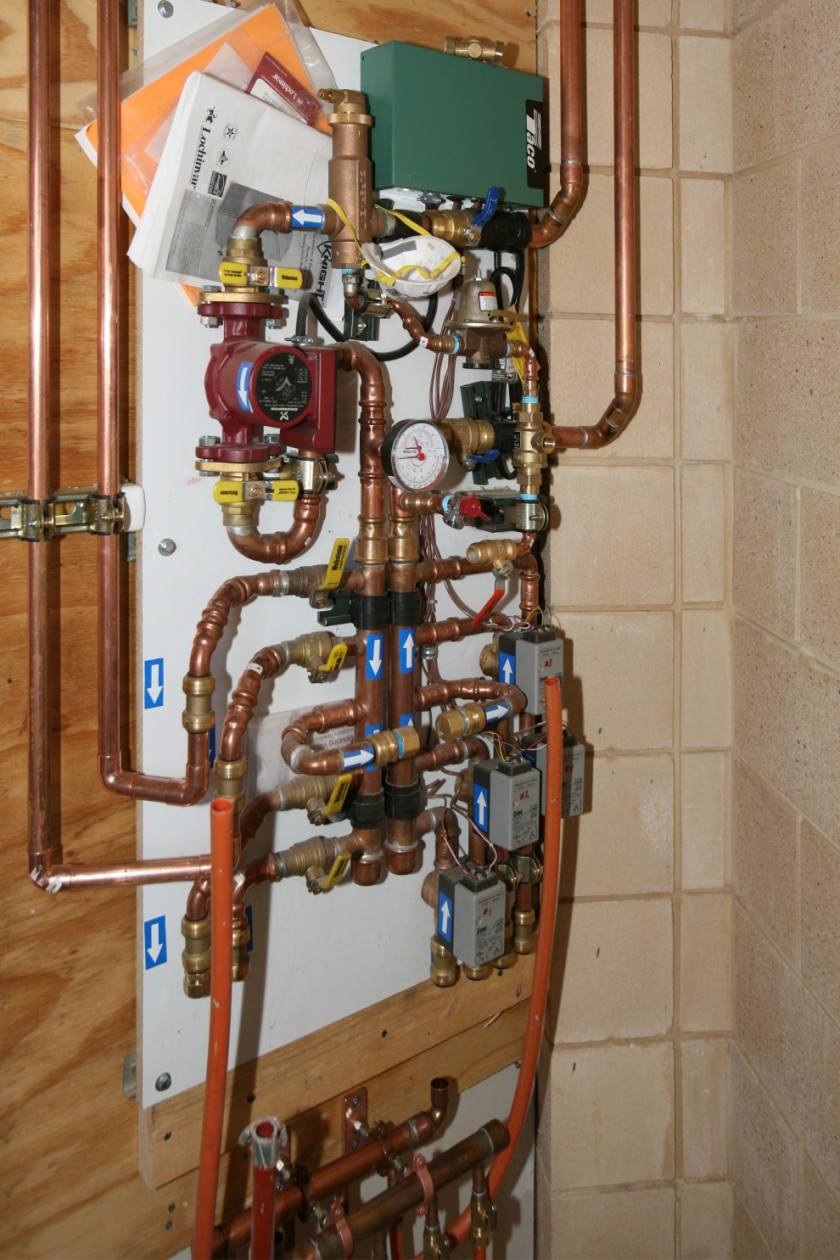 Here is that manifold in a bit more context: 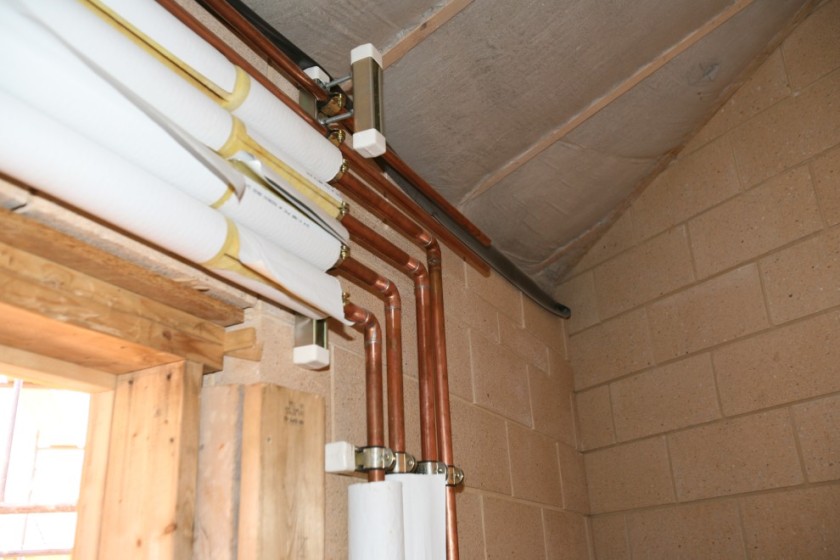 There’s been a lot of good work done in a very small amount of space!

Moving out to a slightly larger set of spaces, the Booth walls are getting their first layers of drywall installed.  Here’s the drywall in Booth B, which is screwed into resilient channel (acoustically isolating it from the frame wall):

A close-up look at some of the calculations involved in cutting our 4’x12′ sheets to the proper sizes for installation:

And now a drywall is hanging on both sides of the frame wall: 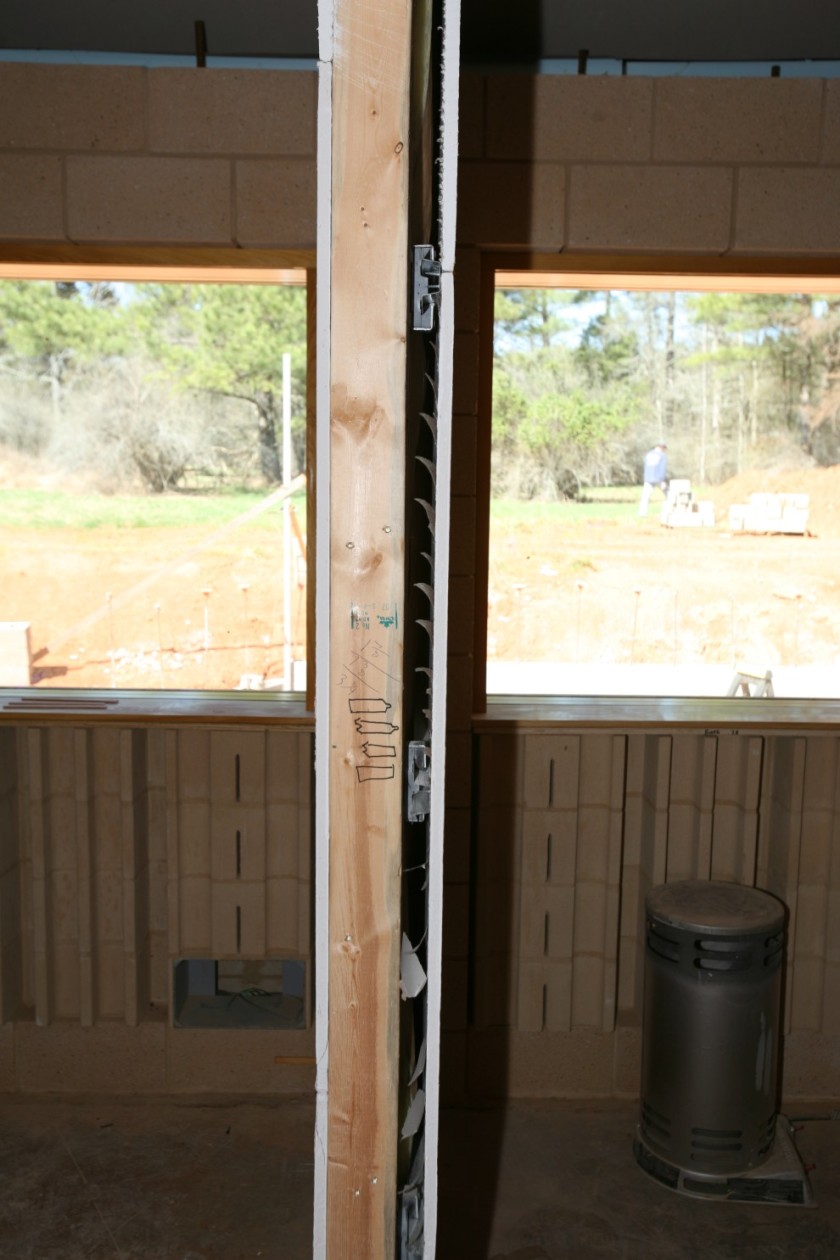 Only two more to go on each side (plus some Green Glue) and we’ll have our Booth isolation work done!

In a still larger space, the Music Room ceiling receives its third and final layer of sheetrock.  Here’s a shot just before the third layer is completed:

Notice how the sheetrock team has changed the pattern from a normal linear pattern in the 2nd layer to the pattern following the logic of the roofing pattern in the third layer.  Recall that from layer one to layer two the crew had installed the sheetrock offset by 1/2 a unit.  By changing again the pattern of the sheetrock, they not only made the job easier for the crew coming after them (installing the finished ceiling surface) but they also got out of their own way by creating non-conflicting lines for the screws.

Here’s what the almost finished ceiling looks like, with virtually all of the mudding and taping done:

And there you have it: about 8500 lbs of sheetrock, several pails of Green Glue, and I don’t know how many thousand screws attaching the whole thing to spring-isolated hat channel.

Moving to yet a larger space, the rebar for the Annex slab has been placed:

A form was also made so that when the Annex Slab is poured, it comes out level at the driveway:

This makes the Annex slab feel all but imminent!

Speaking of the slab, we will be using concrete mixed with an integral coloring agent.  Here’s a sample of what the finished surface might look like one hour after it’s been worked:

Our concrete lines will not be square like this, but will express the diamond grid upon which the entire studio is based.

Here is another view of the concrete form that also accentuates the fact that the light fixtures in the Annex have been installed: 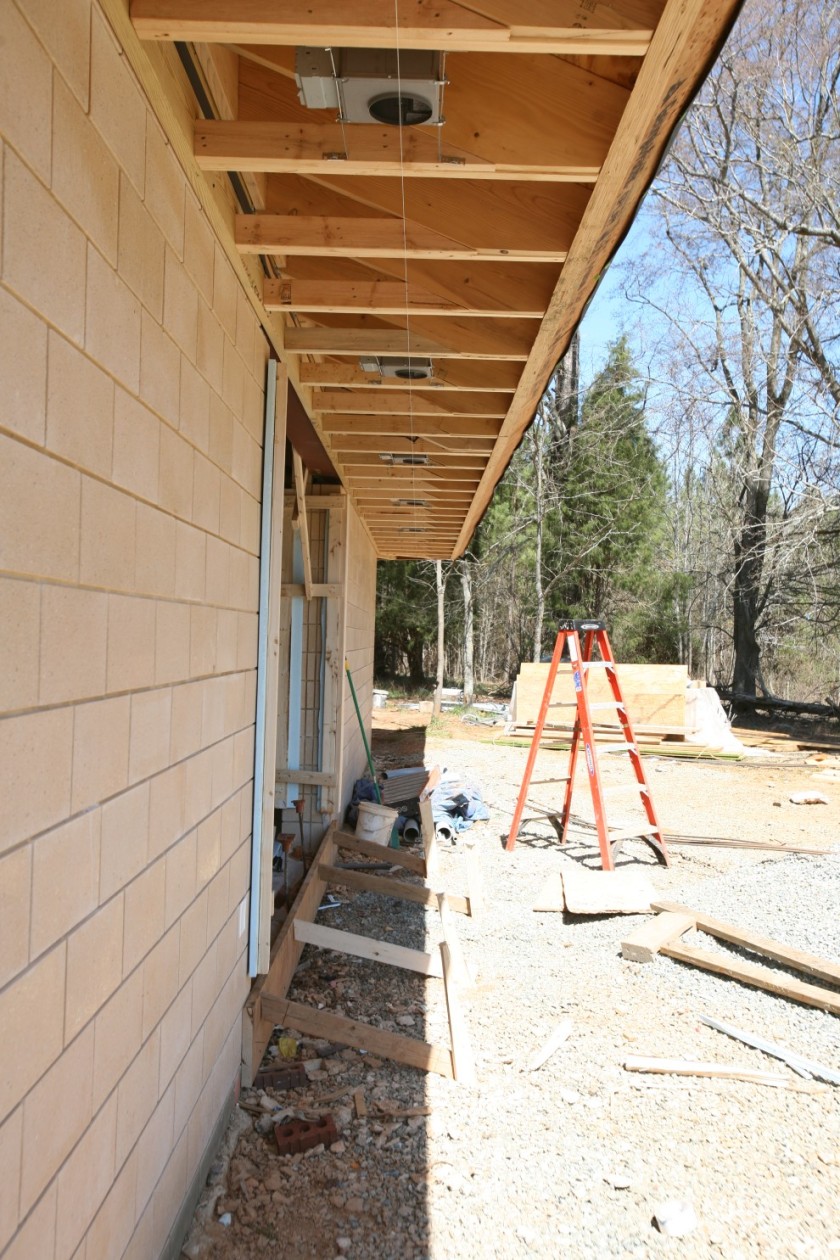 Finally, let’s zoom all the way out to see the progress of our landscaping work.

The big news is that our plan now includes a water feature!  Wes drew up a plan and our surveyors translated that plan to the ground:

It is a bit tricky to parse because the ground is decidedly not flat where the lines are running.  Nevertheless, I suspect that a bit more grading will make it obvious that the lines drawn are in fact straight and true.  And when we get some blocks in place, we’ll be better able to evaluate the overall scale of the new feature.

Here we can see that the Lower Soffit is now being built out, with holes drilled into the third (of five) boards that will be installed:

And even out to the fourth board in some places:

The wall that will be shielding our condenser units from view has grown a second wythe:

We suspect this outer wall (which is outside the wythe that is already outside the grid) will provide the foundation support for the RPG blocks that will face the condenser units, trapping their bass vibrations and diffusing their higher frequencies.  Here’s a detail of all the steel and concrete holding things together at the sharp angle:

I daresay that nothing is being left to chance with this type of construction.

And more rebar is coming up in the landscaping wall beyond the Annex: 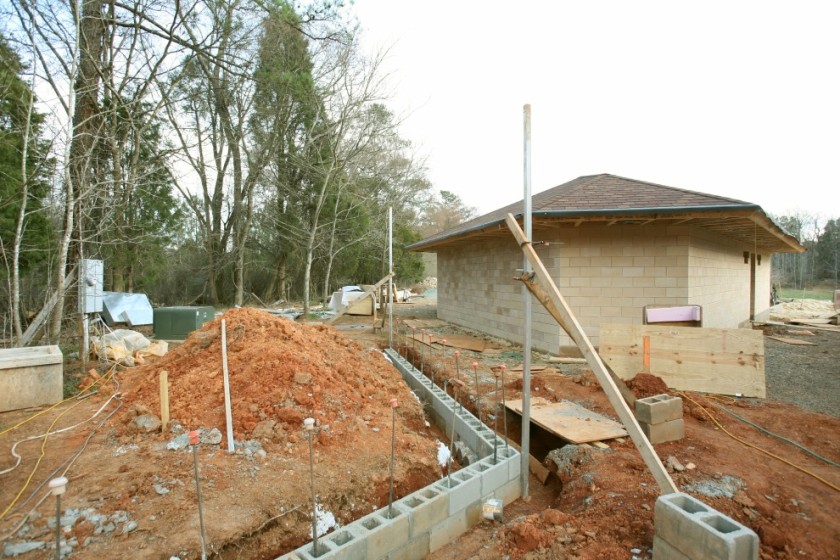 Notice, by the way, how small the Annex looks from this perspective.  It’s a wonderful optical illusion that the closer you get to the small walls at either end, the smaller the Annex looks.  If you get close enough, the whole 1700 sq ft building disappears behind a wall that’s just 8′ wide!

Here’s another view of the water feature (showing also one more board in the lower soffit):

There was one other new thing coming out of the ground this week: