Despite yet another snowfall and two more days of rain, we finished (or nearly finished) a slew of milestones this week.  We finished preparing the Music Room ceiling so that it can accept our acoustic ceiling.  We basically finished framing and sheathing the Annex roof.  We blew in the tons of insulation required in the roof rafters and ceiling joists in the Booths and the Music Room.  We finished framing the Booth walls with staggered studs and resilient channel.  And we almost finished the masonry for the Loggia.

But the stage has also been set for starting some new major work: building the cypress soffits for the lower roofs of both the Main and Annex buildings, hanging drywall throughout the Main building (and later the Annex), and the major project that defines this week’s title: the perimeter footings that will underlie our landscaping walls, equipment corrals, and the various patios that extend from and between the buildings.  Here, in a fisheye view, you can see how the footings define the future outline of the patio in front of the Loggia:

The Annex roof began approximately half sheathed.  Here is that half freshly wrapped: 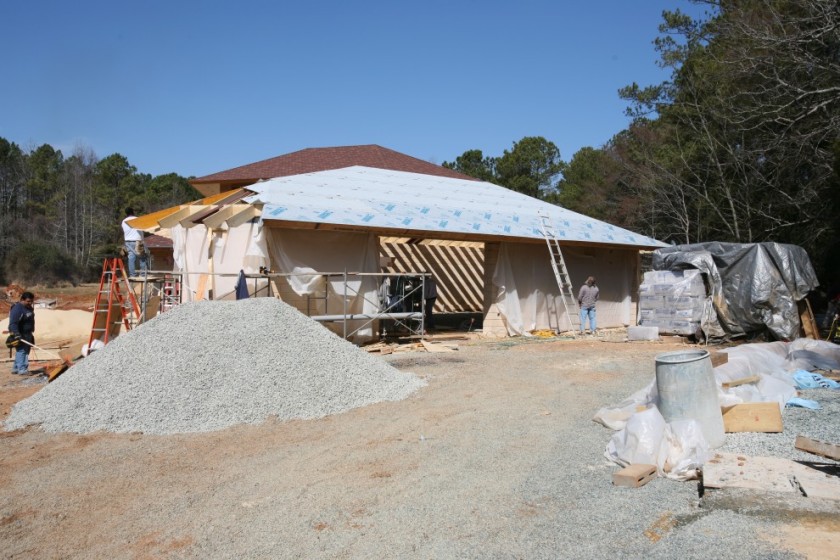 Meanwhile, a footing trench was (carefully) dug around the perimeter of the exterior concrete slab: 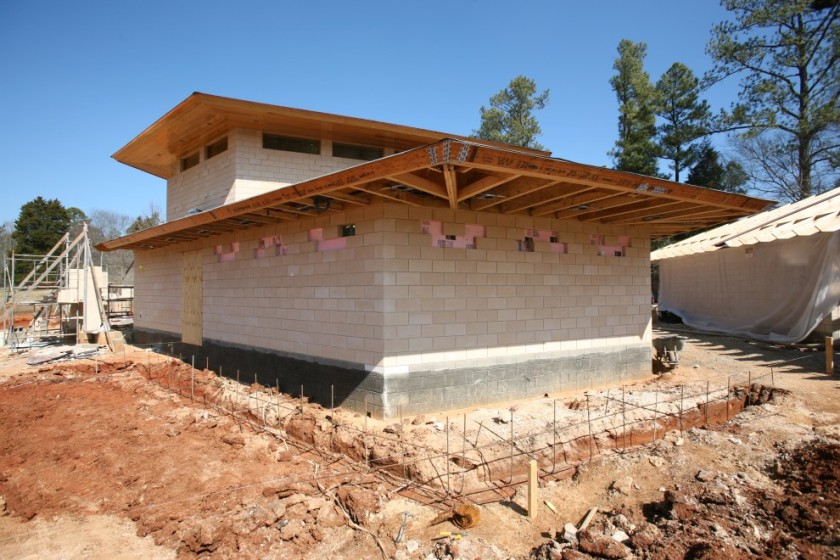 I say “carefully” because much of the trench is directly under the soffits and it would be very easy for the backhoe operator to lift a bucket of soil a little too enthusiastically and bang into the soffit with the arm of the backhoe.  Fortunately our guy had no trouble keeping everything under control, so there was no damage.

The trench was quickly filled with the rebar needed to tie everything together:

Here you can perhaps get a sense of how deep the trench is, both by its open cavity behind the Control Room (on the right) and the person working inside the trench (to the left):

Here you can see a dam that’s been placed in the trench.  When the concrete is poured, it will pool behind the dam to provide one surface level, and it can find a lower level on the near side of the dam.  This will make a lot more sense when the first few courses of blocks are laid. 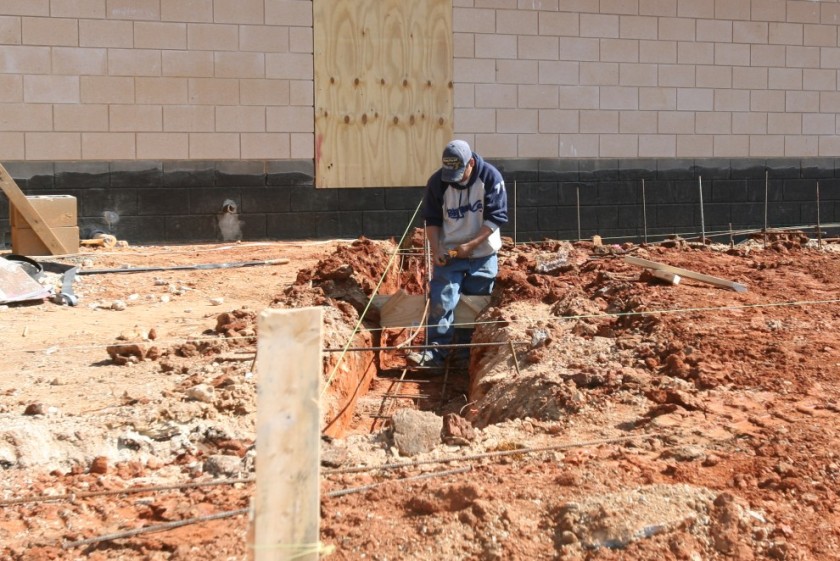 Here’s another part of the trench where there are two dams, meaning that we have blocks 8 inches and 16 inches below the farthest part of our trench-to-be.  Note also that the rebar has not yet been laid all the way…it will be!

Does it look like these machines are playing together or fighting?

Also, notice how high the arm of the backhoe wants to travel when it’s not under the soffit!

Here’s a closeup of the trench (with some orange paint signifying something): 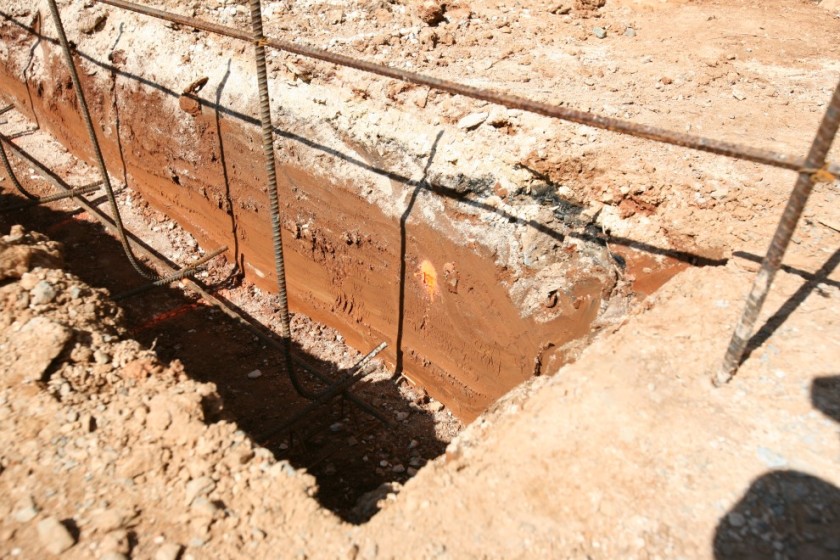 I don’t really know what it means, but I do know this: there’s a lot of rebar going into these footings!  And I know one other thing: there’s a lot of dirt coming out of those trenches that has to go somewhere: 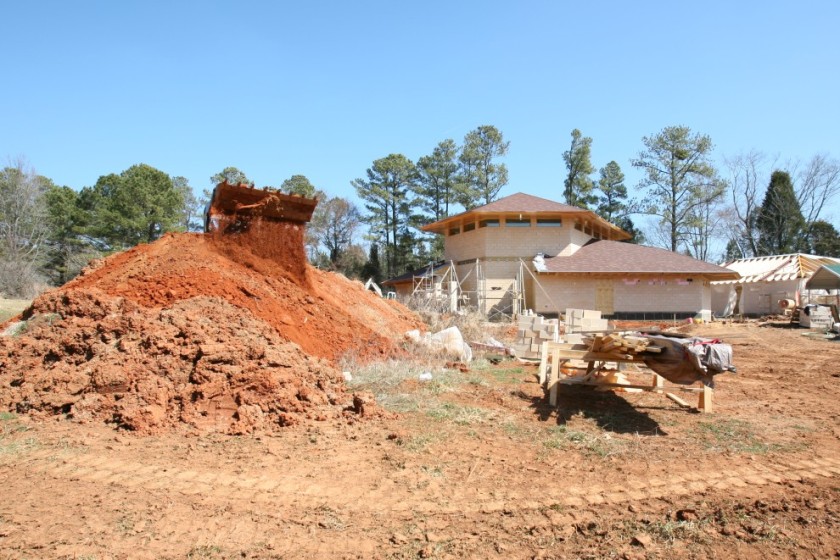 Then the cement truck arrives and starts pouring concrete: 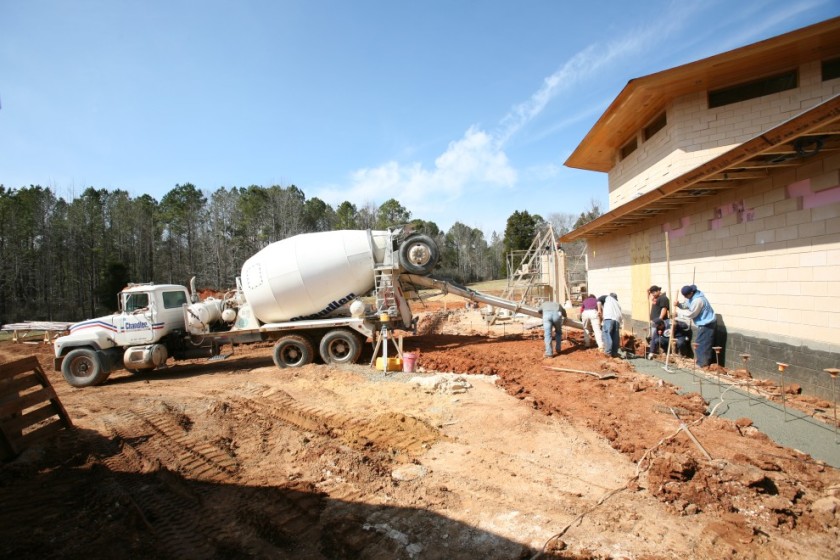 And after three pours of 5 yards each (15 yards total), the job is done: 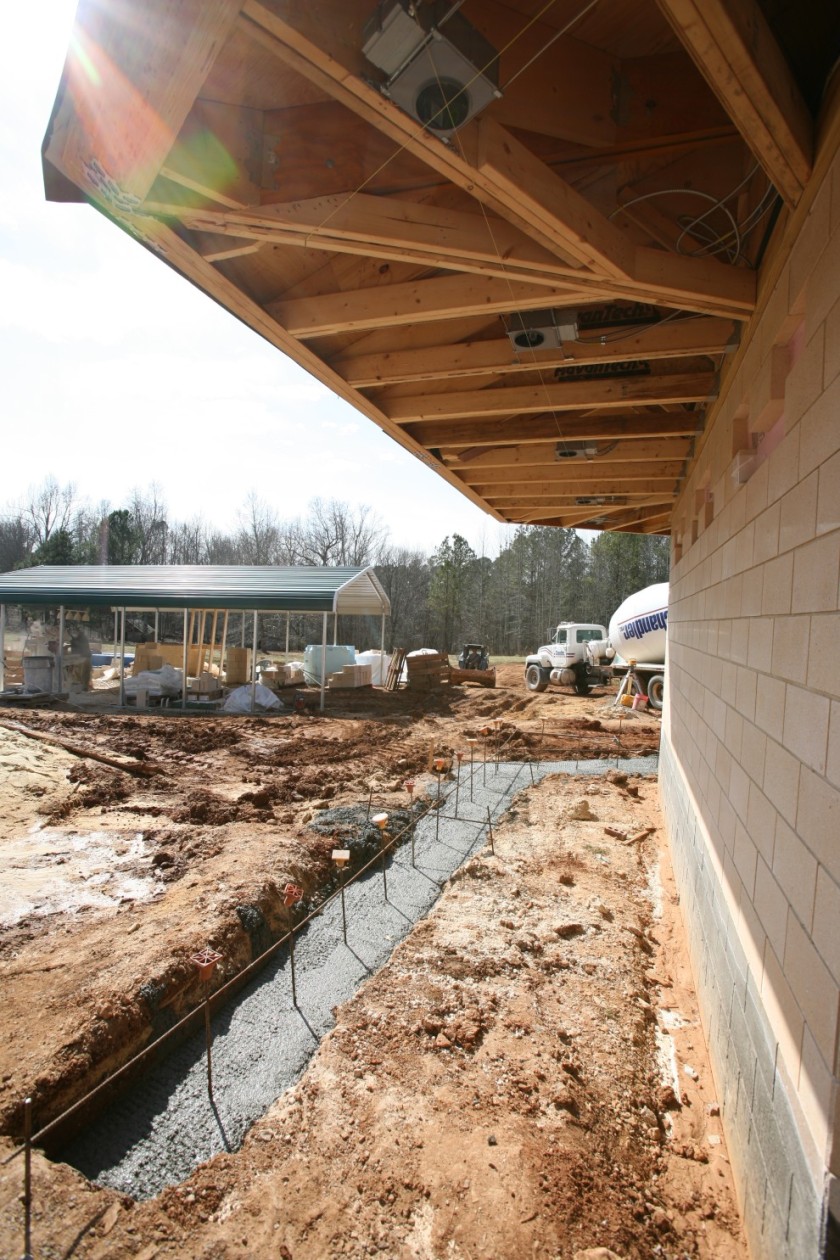 Or so you might think…when we got some more rain these beautiful trenches filled with water that had to be drained.  Yuck!

In other news, the huge pile of insulation was finally opened up and readied for use:

5 Pallets * 42 bags per pallet * 28.5 lbs per bag = 5985 lbs, or about 3 tons of insulation material that will be blown into our ceiling rafters and joists.  Material in the bags is made from recycled newspaper that’s treated with a flame retardant.  The gray blocks feel like compressed dryer lint and need to be fluffed (for lack of a better term) before they can be blown in.  Here’s the machine with two blocks loaded into it: 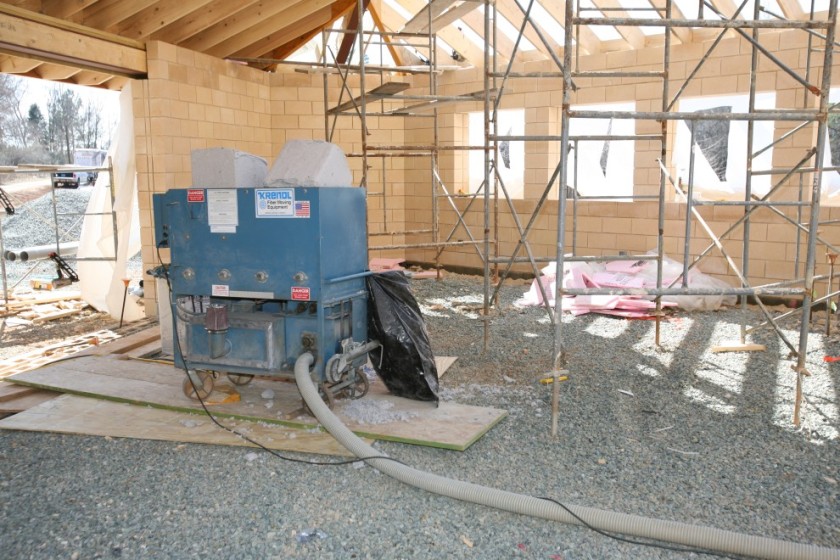 Metal blades inside the machine chew up the blocks, fluff the material, and then it is blown through the hose you see above.  Here you can see the blades churning: 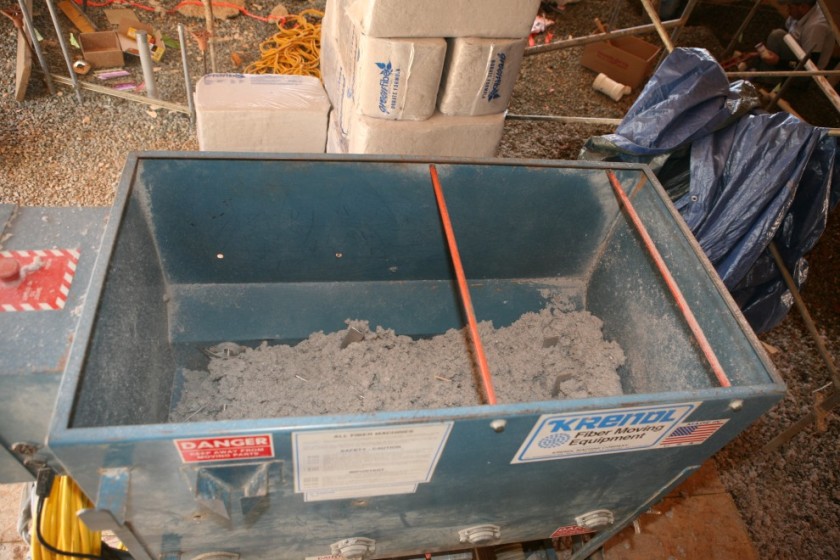 Here you can see the contrast of the filled and not-yet-filled rafters in Booth A:

Booth A is filled, and then it’s time to fill Booth B:

And then it’s time to fill the Music Room: 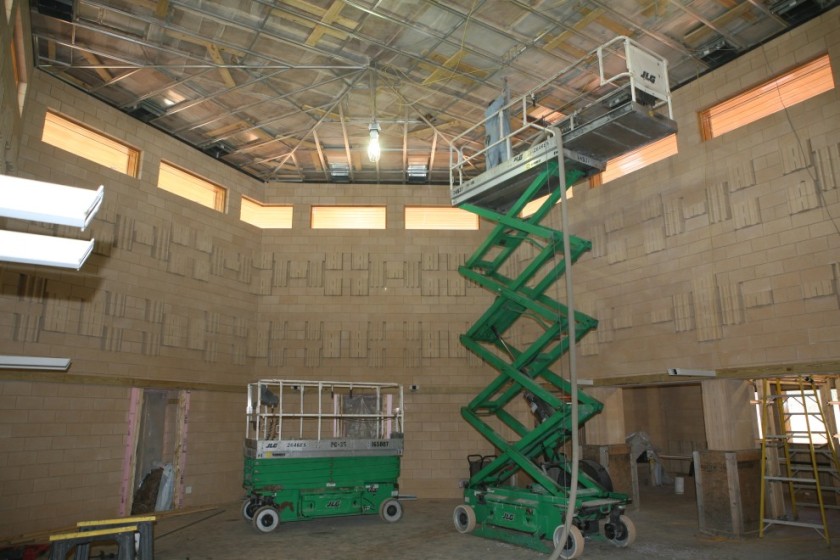 While that’s going on, the framing is being finished in the Booths.  The frame walls have been built, but where we are not using staggered studs the walls are completed with a resilient channel: 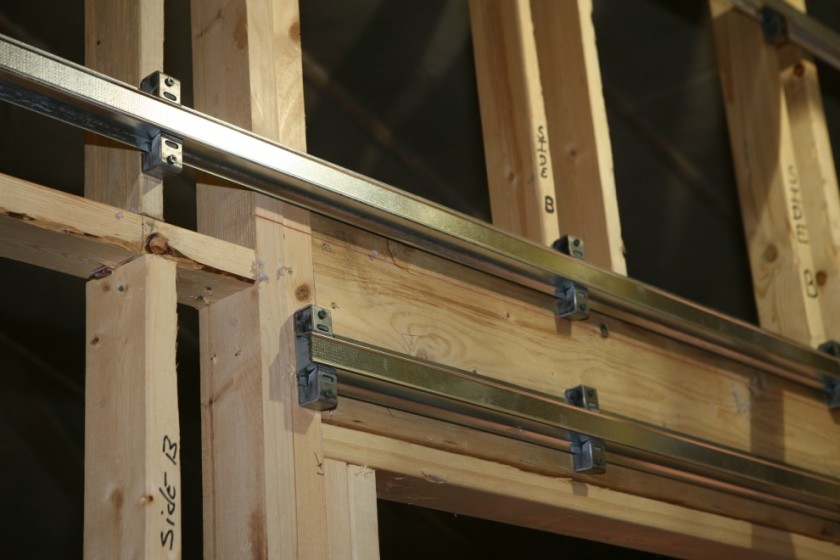 More sparks fly as the resilient channel is cut to fit the booth walls:

Ten tons of drywall are delivered on Friday:

All our acoustic walls will be built with three layers of 5/8″ drywall: two pieces that are conventionally glued (liquid nails) and then that pair is augmented with a layer Green Glue and a third piece.  I think we have $5,000 worth of Green Glue (which we’re buying by the pail):

And applying with our own special glue guns:

Moving over to the Annex, the roof sheathing is largely done:

As you can tell from these photos inside: 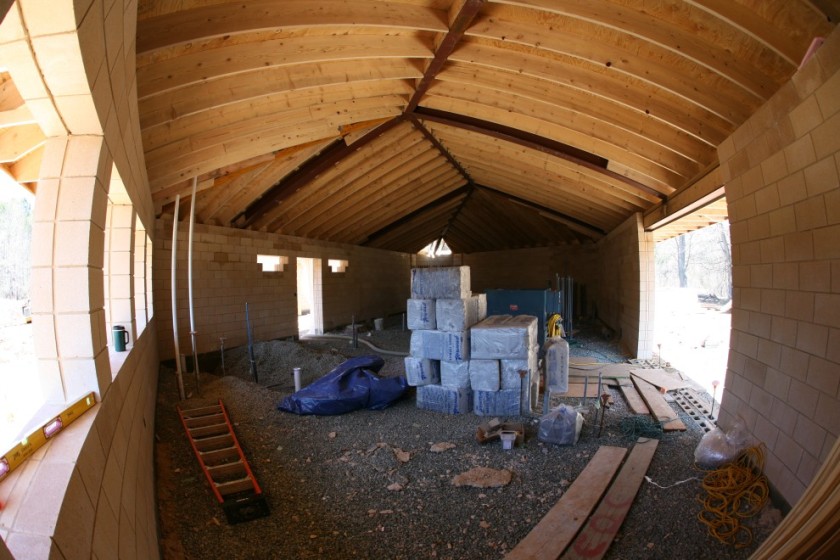 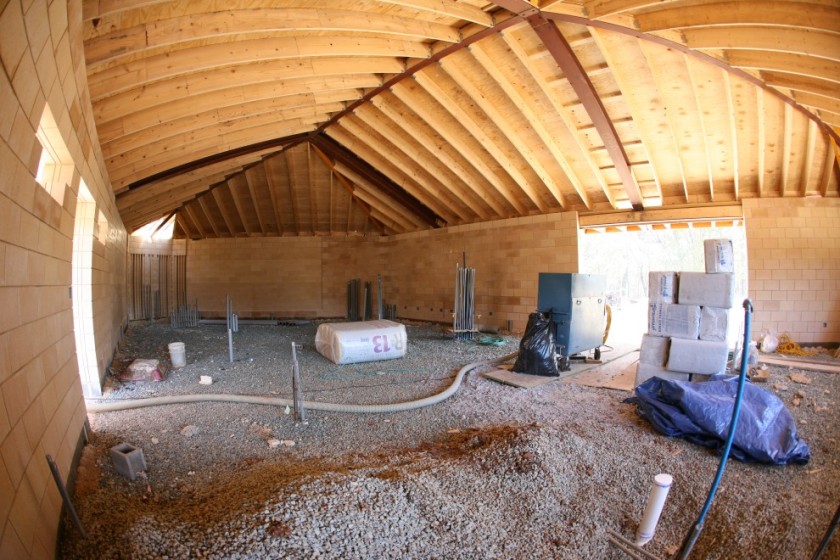 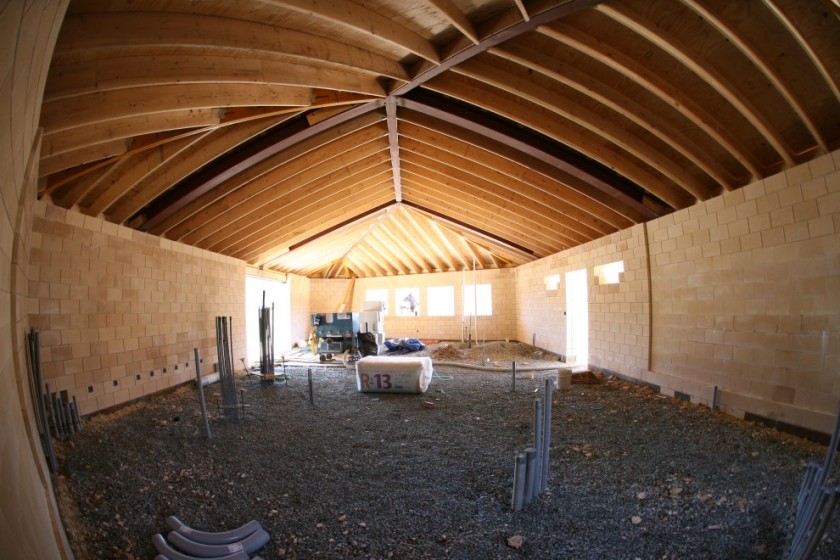 That’s about it for this week…have a great weekend!