Before this past week, I had thought that the maths involved in framing a 5:12 pitch roof was fairly straightforward: for every 12 feet of run, there’s 5 feet of rise, and so there’s not much to figuring out how to cut a rafter and put it into place.  That may be so for rafters that are running perpendicular to the walls and/or roof pitch, but things get a lot more interesting at the hips, when two facets of a roof come together to form one common line.  If you don’t believe me, check out these hip shift and hip drop calculations.  With many tangents and arc tangents, it’s not for the faint of heart!  And so our brave carpenters begin the most complex part of the Control Room roof yet: the hips…

The work begins with a double-angled cut, one angle being the inverse of the 5:12 pitch so that the rafter mates to the vertical plate embedded in the side of the bent steel beam and the other angle being the 60 degrees less than perpendicular at which the beam meets the plate. 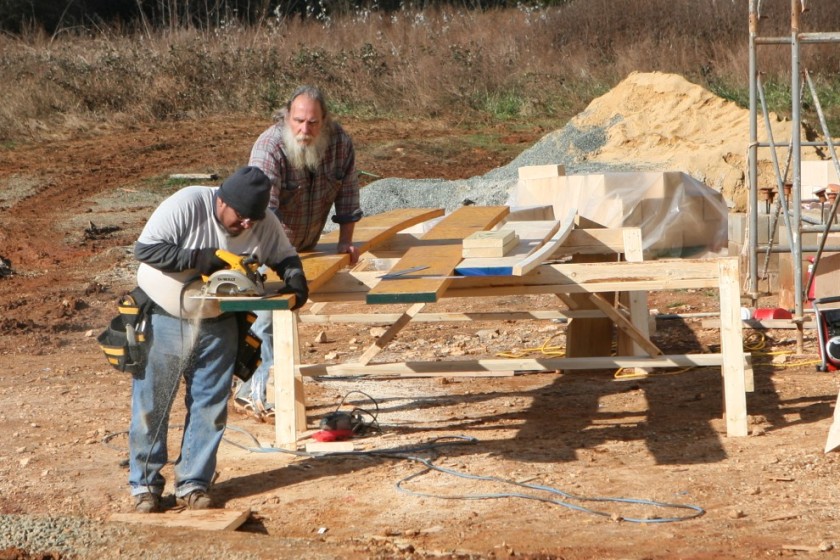 These two angles are cut simultaneously by making a non-square cut (which you can see here) and adjusting the angle of the blade off vertical (which is more difficult to see here).

If it sounds like a lot to keep track of, it is…the first cut needed to be corrected because the first cut used the wrong half of the 30°/60° split.  A small error, easily corrected.

The next bit of work was to establish the landing zone for the hip rafter:

That location, specifically the length from the bent steel to the top plate, determines where to cut the birds-mouth:

In a perfect world, one could just calculate all these measurements, do the work in a shop, and then assemble in the field.  But the fact is, not all rafters are perfectly straight—including the steel beams.  With rafter lengths well over 20′, these small differences are amplified, hence the field measurements and cutting, and in this process, errors can be averaged out rather than compounding.

With the rafter prepared, it is hoisted up to the roof: 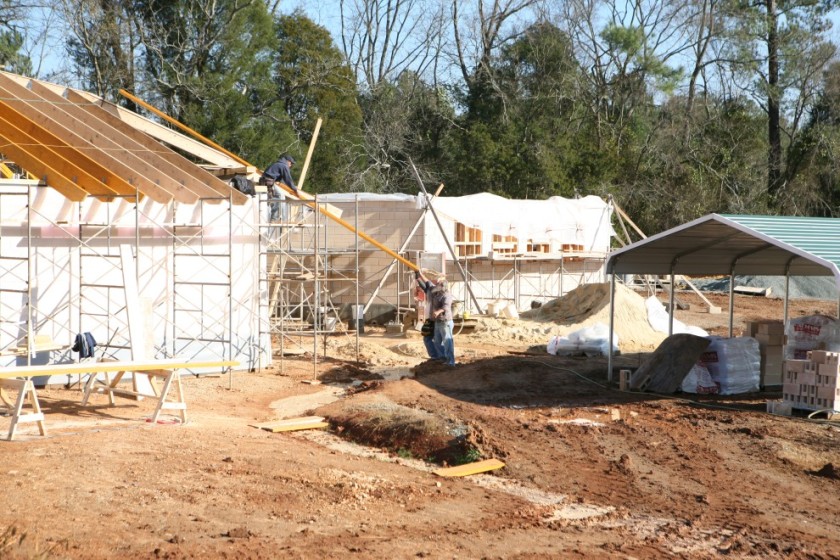 And then it is put into position:

Because the hip defines the intersection of two planes, the hip must be verified to be coplanar with both planes: 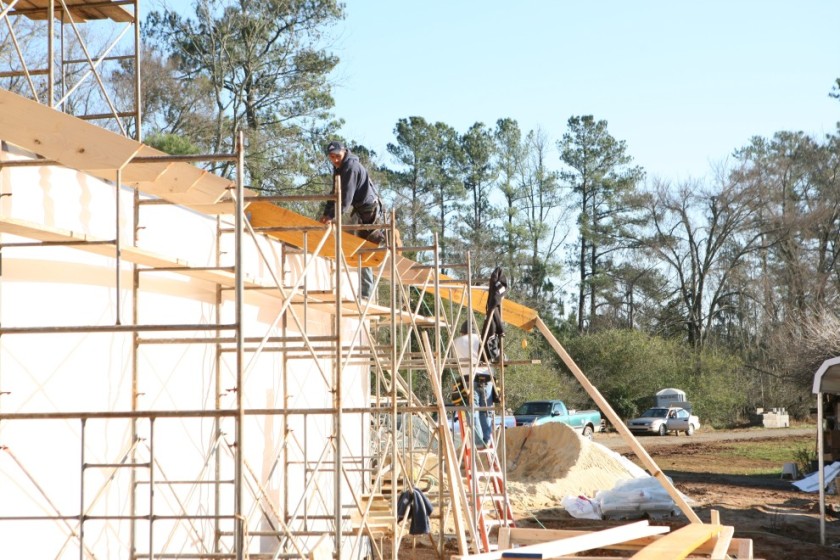 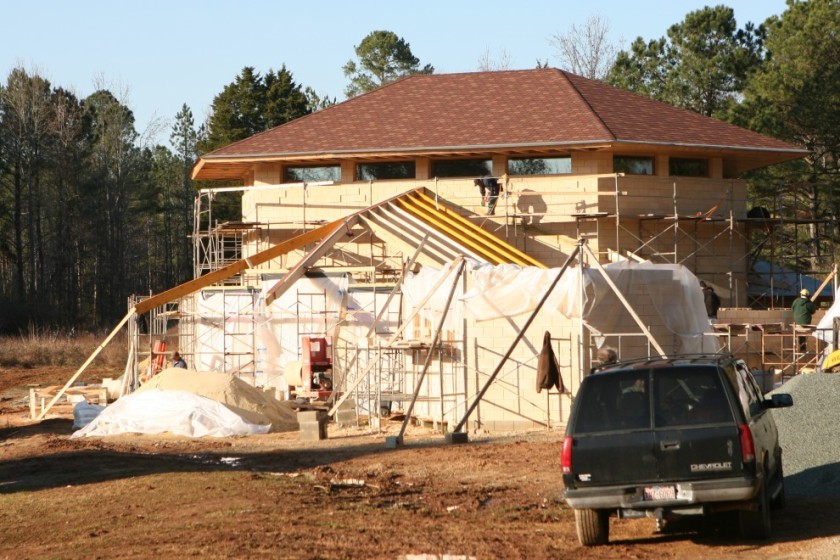 And in another plane (somewhat):

It may not seem like much for a day’s work, but this is one place where it is vital to get things as right as they can possibly be.

Working up through Christmas, the carpenters made some more progress, including the setting of the other hip (which you see edge-on in this overview):

And a much better perspective from which to judge co-planarity of the South facet:

But we can also see quite a bit of other work, namely the installation of the mitred glass windows and several more courses of Cypress soffit material where there was none before: 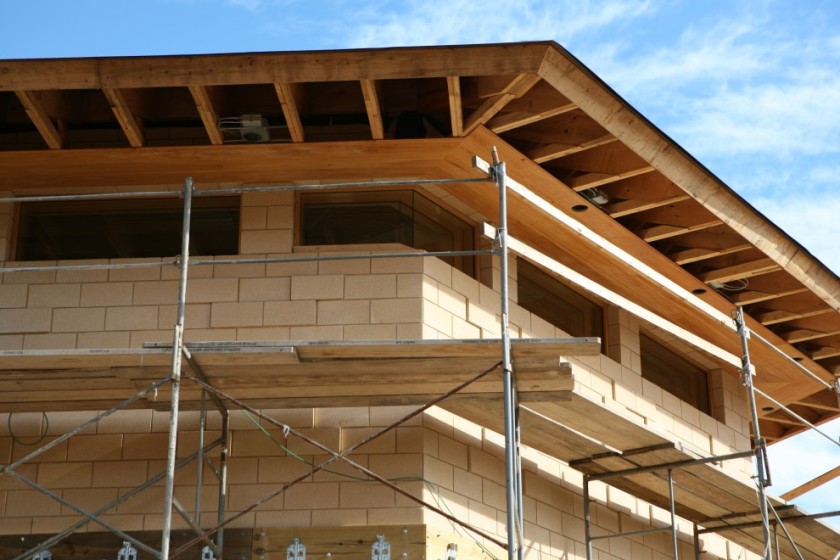 And from the inside: 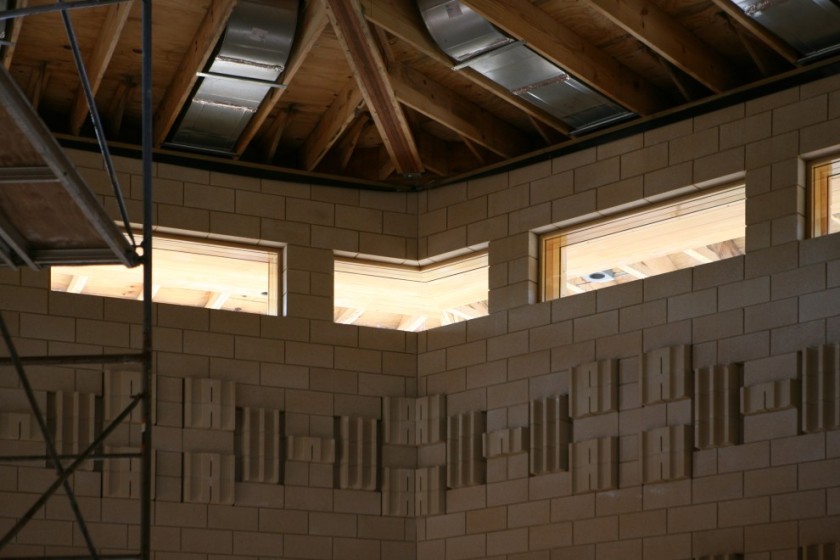 The masons, too, made progress, getting within striking distance of finishing the top Annex bond beam by the end of the year.  Here are the few blocks left to be laid: 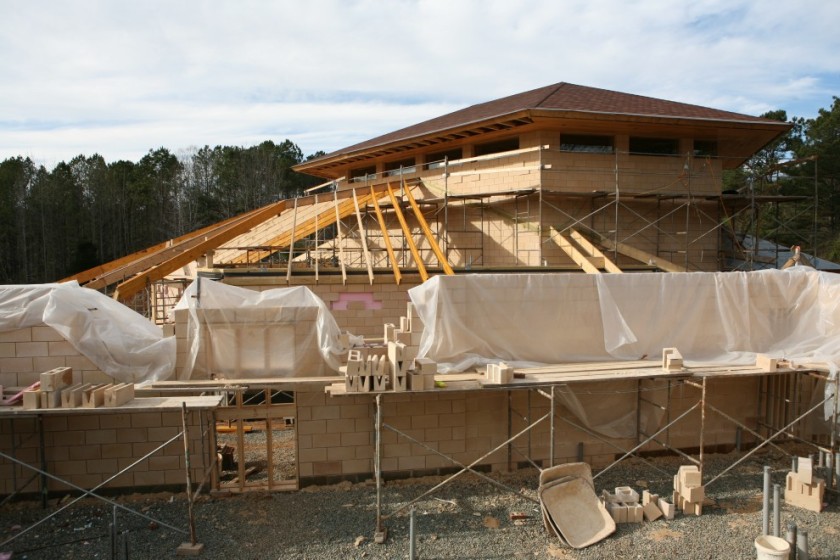 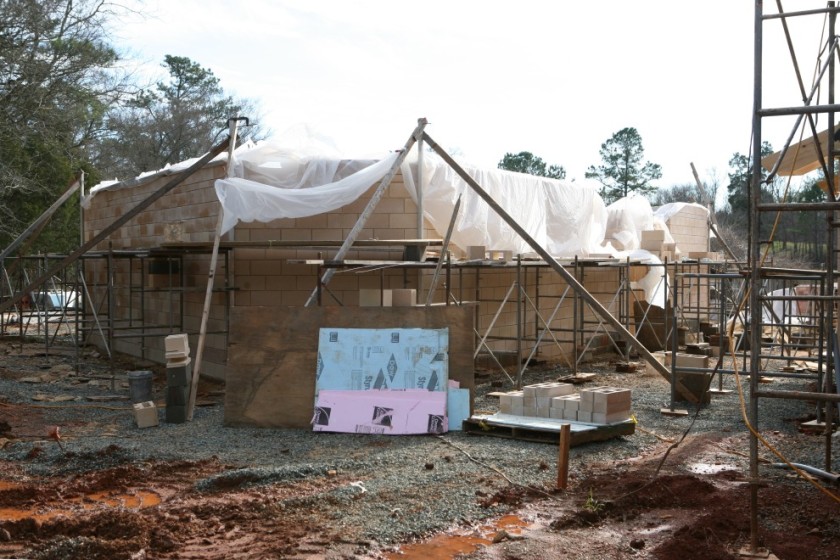 And here’s where we stand going into the last week of 2009: 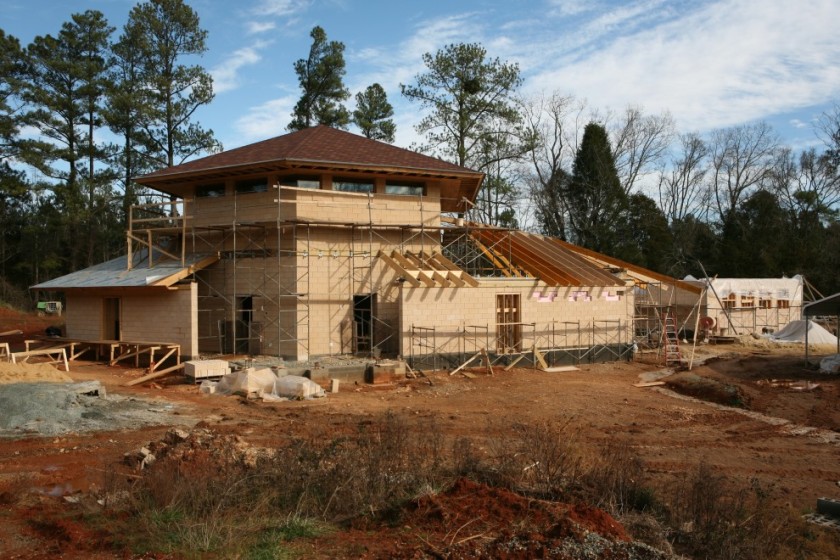 It looks like we have at least 3 more days of favorable weather, so stay tuned for next week’s update!