We’re getting down to the last nitty-gritty details before pouring the slab.  One of those details is the precise question of how we’re going to build the rear of the control room, which will incorporate a symmetric 4-step QRD built from RPG blocks.  We’ve had a general idea ever since Wes Lachot first drew that page of the plans more than a year ago, but now we need to know the exact answers, down to the sixteenth of an inch.  So we went to the field to see how our theories comported with reality… 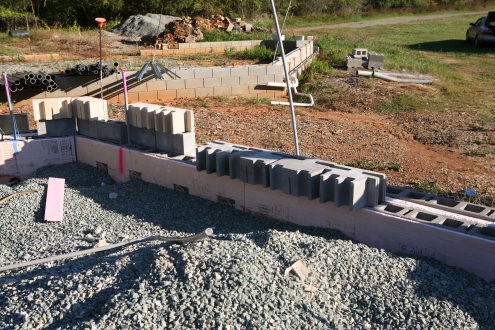 Here you can see a photo that shows 8″ RPG blocks resting on 6″ stretchers with some blocks pushed back toward the outer wythe, some aligned with the rear of the inner wythe, and the 12″ blocks actually protruding in beyond the inner wythe.  But that doesn’t really tell the whole story.

The larger story is recognizing that nothing is harder for masons that laying in a pattern that does not correlate to the patter below, and the straight wythe we built as our screed course does not tell the whole truth throughout the whole control room.  Indeed, we created several problems for ourselves already because the electrical folks followed the mason’s screen course diagram instead of the block “take-off” lists that were developed from my extensive block diagrams.

Wes spent some quality time with AutoCAD and came up with a really elegant solution that gives us perfect trilateral symmetry along the back wall and gives the masons a perfect form against which they can build a design that varies a full 8″ from deepest insertion to furthest extension of the RPG blocks.  Herewith, the AutoCAD drawings!

First, the first course of blocks, which are all polished-face blocks.  Note how the backs of all blocks are in a perfect line:

Second, the second course of blocks, which runs up to the 6-foot height level.  Note the QRD pattern expressed by the front of the blocks, which is predicted to extend the diffusive properties of the wall by a full octave in frequency:

With those plans now drawn, we can go about the business of mitring the RPG block and see how the “A” blocks stand up to the task:

Here’s an example of an electrical conduit that’s in the wrong part of the block because the electrical guys assumed they were bringing the circuit up through 8″ blocks instead of into a 6″ block.  We’re going to fix that problem by moving the outlet to the adjacent cell.

More as it happens…